Join us as we unpack how journalists from Asia reported plastic pollution through a climate lens during the high-stakes COP26 summit. How did world leaders — if at all — tackle the plastic problem during the climate change summit and how can journalists report on this moving forward?

Jed is the Senior Communications Officer for Asia Pacific of #breakfreefromplastic. Since joining the movement in 2017, he has been instrumental in leading Asia Pacific’s communications work and in organizing capacity-building workshops on communications and campaigning for members in the region.

Biena Magbitang is a multi-awarded journalist with over a decade of experience in broadcast and online media. She is currently the Digital Head of the ABS-CBN News Channel and the Asia Manager of Climate Tracker. She is a member of the International Press Institute and the International News Media Association.

Vaishnavi is an India-based environmental journalist and she works as the Environment Lead with The Bastion. Stories of environmental justice and democracy, governance of commons, forest and land rights, and urban ecology specifically pique her interest. When she’s not covering stories or typing away on her computer, she’s either running, trekking, or attempting a 1000-piece puzzle.

Made is a data journalist who strives to integrate research, communication and development economics to advocate policies. He has won 5 journalism awards and is among the five winners that won Best Article for the 2020 EU4Wartawan Competition organized by the European Union.

Bangkok-based journalist covering environmental stories from policymaking table to the the river bank communities. Nicha believes everybody deserves to know what’s going on with their life and how the changing climate is affecting us all. She sees that it’s time people know about the global negotiations and how they will impact on the local scale.

We’re looking forward to chatting with you about reporting on plastic through a climate lens and highlighting the work being done on the ground across Asia to address this issue.

Stuti Sharma
View More Posts
Climate Tracker's Asia Community Manager. A marketing communications wiz, she is a lighthouse of ideas and a multifaceted prism – you might just see a rainbow come shine out of her when the light hits the right spot. Working out of New Delhi, India, she loves being around animals and nature. Also speaks Hindi. 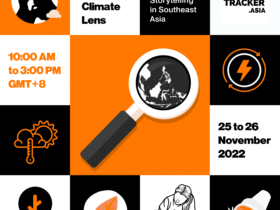