Environmental leaders have expressed concerns about Uganda’s silence on deforestation during the United Nations Climate Change Conference (COP26) in Glasgow.

On the third day of the summit, 105 countries signed an agreement to end and reverse deforestation by 2030, a pledge that was backed up by almost $19.2 billion of public and private funds. Uganda, however, did not sign this commitment, despite its increasing deforestation rate.

Author Owor, director of the African Center for Research and coordinator of the environmental group Our Trees, We Need Answers, stated that he expected he Ugandan delegates to make a stronger commitment to protect forests.

“I’m shocked that our country has not pledged to fight deforestation. We are being let down by our leaders,” Owor said.

The African country has seen an increase in deforestation in the last decade. While in 2001, the country lost 297 km2 of forest, by 2020 the figure had more than doubled (736 km2 of forest lost in a single year), according to data from the online forest tracking portal Global Forest Watch.

“Uganda suffers huge losses and damage because of climate change. Still, developed countries may not concern themselves if we do not present our case or prepare well enough to receive their support,” he said.

Leonard Okello, chief executive officer of the Uhuru Institute for Social Development in Kampala, stated that deforestation must be tackled fast, before it is too late to recover the country’s forests.

“Uganda has only ten per cent forest cover now. This is dangerous, as deforestation causes severe drought and devastating floods, which affect crops and temperature,” Okello warned.

Nwoya is one of the districts in northern Uganda that suffered most at the hands of the Lord’s Resistance Army (LRA) rebels for more than two decades. Today, the residents of Nwoya are facing another conflict: this time with wildlife, as the habitat of these animals has been cleared for agriculture or commercial charcoal.

After the war with the LRA ended in 2006, people who had, for years, relied on food donations from the government and other charities entered the charcoal business. As a result, the demand for undisturbed forest land began to grow.

The lack of alternative energy sources is one of the causes of deforestation. Around  per cent of the population still uses wood fuel for cooking due to affordability and ease of access. In 2020, this practice led to the depletion of 73.600ha of Uganda’s forest cover.

John Bosco Okullu, a resident of Koch Goma sub-county in Nwoya district claims that at least 20,000 acres of previously forested land has been cleared of trees.

Notably, Nwoya district is home to Murchison National Game Park, where wild animals used to roam freely in the wildlife reserve. Since these areas have now been deforested, the animals, mostly elephants, are leaving the park, entering people’s gardens, destroying crops, homes, and injuring and even killing citizens.

“The trees in these community wildlife reserves have disappeared. The animals have nowhere to hide, they have become a threat,” Okullu said. “Two weeks ago, two people were killed by an elephant that ran amok in our trading center,” he added.

Initially, the government advised locals to dig trenches, plant chili or set up beehives to scare the elephants. However, these methods have not proven to be effective.

Between July and September this year, Okullu lost 50 acres of soybeans, maize and groundnuts to marauding elephants.

“That is just my farm alone. At least 5,000 acres of crops in my area were destroyed within three months. And this has been happening for the last ten years,” Okullu said.

As animals leave a trail of destruction each season, the farmers have to adapt their crop planting calendar, as deforestation has also affected weather patterns.

“Many growers no longer follow the weather predictions to decide on their planting season. We just plant and spray with chemicals to sustain the crops,” the farmer said. “Farmers who still rely on the dates announced by weather forecasters are suffering losses each season.”

Because of the impacts of deforestation, environmentalists argue that Uganda should have been among the countries negotiating for an end to deforestation during COP26.

Protecting forests could also help the country to withstand extreme weather, environmentalists said. In 2019, Uganda was considered the fourth most affected country by extreme weather, according to the Center for Research on the Epidemiology of Disasters.

But the country will need financial support to protect its forests effectively, environmental experts said. Muhumuza said Uganda must be more astute, as the money only goes to countries that have mechanisms in place.

“The $100 billion is divided into different baskets. It is not a lump sum amount that a country receives. Each basket has its requirements. For a country to access it, it must have a justifiable proposal or reasons,” he said.

The global climate finance structure comprises many different financial instruments and many multinational actors are involved. For instance, the money destined for mitigation targets renewable energy projects, energy efficiency, forestry, land use and sustainable urban transport. The sum aimed at adaptation focuses on increasing resilience to the impacts of climate change.

Muhumuza, who spoke to Climate Tracker as he was preparing to fly to Glasgow on 2 November, said Ugandans must take the government delegation to task and hold them accountable.

“What will we bring back from COP26? We also need to look at those initiatives that worked well in other countries and implement them in Uganda,” the youth leader added.

According to Owor, the current government negotiators have been ineffective in committing to actions to stop deforestation. “Ultimately, they are just going from conference to conference as trees continue to be cut down. They are not connected to the actual situation on the ground,” he said.

For his part, Okello warned of the risk of crossing a tipping point when it comes to forest loss. “We lose trees for timber and medicine. We have all the advantages of two rainy seasons because we are on the Equator, but we are taking this for granted,” he added.

Although Uganda seems committed to climate crisis talks, Okello doubts the country will use COP26 as an opportunity to take its climate crisis mitigation efforts up a notch.

“Mother nature will not wait for more conferences. We just have to take the right actions,” Okello said.

Bob Natifu, the acting commissioner in charge of climate change at the Ministry of Water and Environment, is a member of the Ugandan delegation in Glasgow. Natifu did not respond when questioned about Uganda’s plan for tackling deforestation.

This story was originally published on Friedrich-Ebert-Stiftung, with the support of Climate Tracker.

Caroline Ayugi
View More Posts
Caroline longs to experience dry seasons which don’t drain the energy out of her (because of extreme heat). She sees climate journalism as an intersectional way of storytelling that bridges scientific/policy dialogue with personal lived experiences. She prays for the time when cow dung will smell like cow dung again, and not like human feaces, because they, too, have to be forced to eat posho (maize flour bread) to supplement the inadequate pasture. 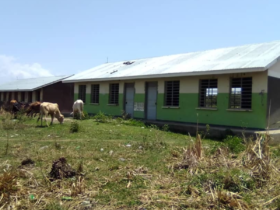 Extreme floods pushed hundreds of children out of school in Uganda

In early 2020, shortly after the Covid-19 epidemic started in Uganda, Lake Albert experienced record breaking floods, sweeping and submerging all houses and other property nearby. Wamaani’s family scampered to safety. 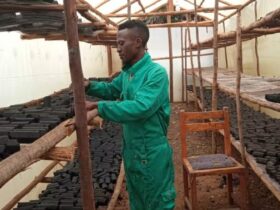