Statistics show that national water resources are in danger of serious decline due to the impact of population growth and climate change.

Ha Tinh province, which is ranked first in terms of water reserves in the country, is currently facing the risk of recession. Not only due to people’s habit of using water but also the erratic changes of weather and climate are also a big cause.

According to the latest research by Ha Tinh Department of Natural Resources and Environment, the trend of temperature and air changes in recent years in the area tends to be complicated. Specifically, the average temperature is increasing every decade from 0.1 to 0.2 degrees Celsius; winter tends to warm up from 0.6 -1.2 degrees Celsius.

Meanwhile, the hot weather situation in the past 20 years has been increasing. Not only has the country been facing long-lasting and intense heat, high temperatures in the range of 36 – 40 degrees Celsius are becoming increasingly common, sometimes exceeding 40 degrees Celsius. Additionally, rainfall has noticeable decreased. The rainy season is now starting late and ending early. In addition, Ha Tinh is also a place affected by many types of natural disasters such as storms, floods, thunderstorms, and whirlwinds.

There’s a predicament for people to face now, as province is not able to meet the increasing demands for water. This directly affects people’s lives and water shortages have been occurring more and more in recent years.

Responding to the press, Mr. Nguyen Hong Quang – Director of the Center for Clean Water and Rural Sanitation in Ha Tinh said: “In the summer, drought occurs in many places such as Huong Son, Huong Khe and Vu Quang districts. Meanwhile, in some areas, such as the Duc Tho and Can Loc districts, there is a scarcity of clean water, causing people to store rainwater for eating and sometimes use contaminated water from lakes and ponds for bathing.

From the inadequacies of water resources in Ha Tinh province, it can be seen that Vietnam is facing many great challenges in terms of sustainable management of water resources – one of the important factors contributing to ensuring economic life and proper livelihoods for the people.

In terms of solutions, besides environmental protection and water conservation, the inventory and management of these resources also need to be carried out regularly.

In the National Water Resources Inventory Master Plan, for the period to 2021 – 2025, the overall goal is to publish the water resource inventory targets (for the first time) in the inter-provincial and inter-provincial river basins nationwide on the basis of accurate, synchronous and timely inventory information and data.

In fact, for many years, Vietnam has had many activities to inspect, survey and evaluate exploitation and use of water resources from central to local levels. However, the information and data for inventory work in particular and for water resource management in general are still limited. Hinderances include: survey data is scattered, updated data is lacking, and oftentimes the aggregate scale is not uniformed across the country.

For example, according to the data of the Ministry of Natural Resources and Environment, only considering the detailed assessment of underground water, the measurement rate of 1:100,000 is about 6%; The rate of 1:50,000 is about 5%, detailed investigation and assessment (ratio 1:25,000) associated with the search and detection of underground water sources to supply domestic water can be done 5% for a year. Some large urban areas, islands, high mountains, and water scarcity.

On the other hand, Vietnam has 3,450 rivers and streams with a length of 10km or more in 108 basins with 331,000km2 of basins in its territory. Up to now, the whole country has invested and put into operation 23 independent surface water resource monitoring stations, 23 hydrological stations integrated with surface water resources stations, 412 points with 805 underground water monitoring wells.

Yet still, the national network of monitoring and measuring water resources is still lacking and weak in many aspects. The most obvious point, is that the number and density of measurement and monitoring works are still sparse compared to the network of rivers and streams and the distribution of aquifers nationwide. Incomplete and inaccurate data makes the calculation, inventory and management of national water resources difficult for the authorities.

This story was originally published on baophapluat.vn, with the support of Climate Tracker. 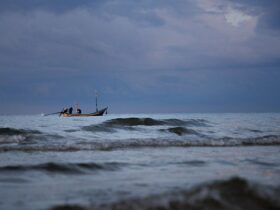