A 2015 study supported by the Konrad Adenauer Foundation revealed that 37% of urban households in Zimbabwe use firewood/charcoal as a source of energy.

Thulani* is a 17-year-old charcoal seller, a trade he carries out illegally. For nearly a year, he has been travelling from Mbare to Mukumbura village, one of Zimbabwe’s connections to neighbouring Mozambique and a hotspot for unlawful charcoal production. His high-school journey ended barely half-way when he was fifteen.

“I usually go there two to three times a month to buy Mopani charcoal,” says the teenager.

For many young men in Mbare, “this is the only way to survive.” According to 2021 data from the World Bank, nearly half of Zimbabwe’s population lives in extreme poverty. Moreover, power cuts are frequent. Selling and using charcoal as an alternative energy source becomes an easy solution for the young and unemployed.

While creating and trading charcoal is illegal in Zimbabwe, imported charcoal from neighbouring countries like Mozambique is legal for sale and use provided it has been cleared at immigration. 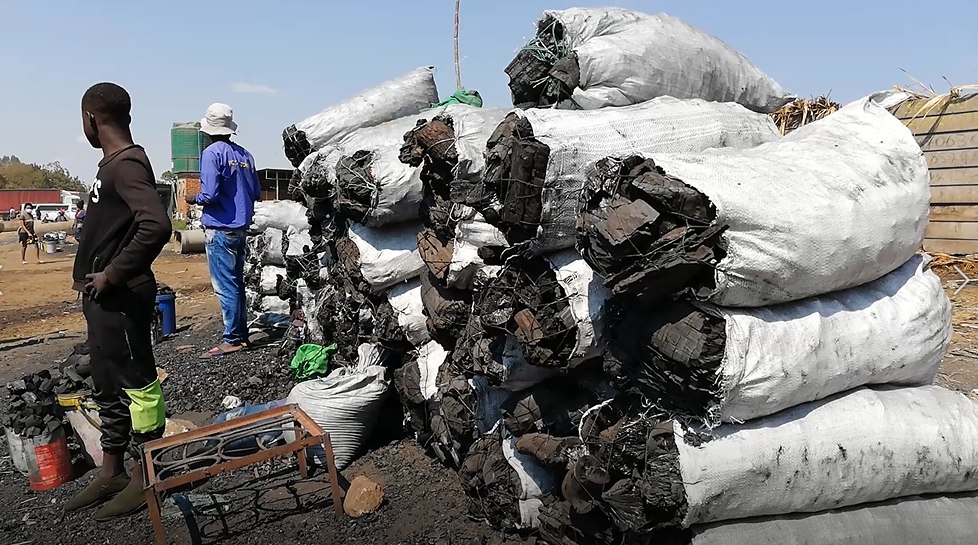 Jacob*, a 20-year-old illegal charcoal seller for two years, has also travelled to Mukumbura. Unlike Thulani, however, he knows how to make charcoal.

“I fill a pit with logs from Mopani trees,” Jacob explains. “A fire is then lit under the logs. Once this fire has caught on, I fill the pit with river sand, leaving the logs under it.” This is done to keep out oxygen. “For three to four days, the logs burn under river sand.”

After this period has passed, what remains are the blocky, dark ashes seen at local canteens and in many Zimbabwean and Mozambican homes.

Zimbabwe’s Nationally Determined Contribution (NDCs) indicates that its “mitigation strategy is focusing on the energy sector as it emits more greenhouse gases than any other industry.” The NDCs also refer to initiatives such as the Renewable Energy Policy and Forestry Policy as evidence of climate action.

A 2015 study supported by the Konrad Adenauer Foundation revealed that 37% of urban households in Zimbabwe use firewood/charcoal as a source of energy. As Jacob points out though, in Zimbabwe, the majority of buyers are the numerous outdoor canteens and restaurants in Mbare and around Harare.

“We bank on striking deals with outdoor canteen owners,” he says. “If one gets 20 or so bags from me a week, then it is good business.”

Mopani trees are preferred over other trees by charcoal producers and consumers alike. They are “indigenous hardwood trees” which typically burn hotter and longer compared to other trees. However, Mopani trees are also difficult to replace, as they take between 70 to 100 years to fully mature. Experts fear the Mopani woodlands found across southern Africa including Mozambique and Zimbabwe are being cut down faster than they can regenerate.

The Zimbabwe Energy Regulatory Authority (ZERA) acknowledges that charcoal presents a cheap source of energy compared to solar and gas. 5kgs of LP gas costs over USD10 according to the latest prices approved by energy authority, more than a 50kg bag of mopani charcoal.

“Yes, charcoal is cheaper than LP gas,” says Edward Mazambani, CEO at ZERA. “However, it has negative impacts on the environment as compared to cleaner LP gas”, he adds.

The 2015 study supported by the Konrad Adenauer Foundation also found that in the period between 1990 and 2015, “Zimbabwe lost 36% of its forest cover at a rate of 9% per decade.” Yearly, Zimbabwe is losing about 60 million trees. The largely informal and illegal charcoal industry is significantly attributed as one of the causes for this deterioration. According to the 1992 and 2017 land cover maps produced by the Forestry Commission from interpretation of landsat images, Mt darwin district, which includes Mukumbura village, lost nearly 30% of its forest cover in the 25 year period. 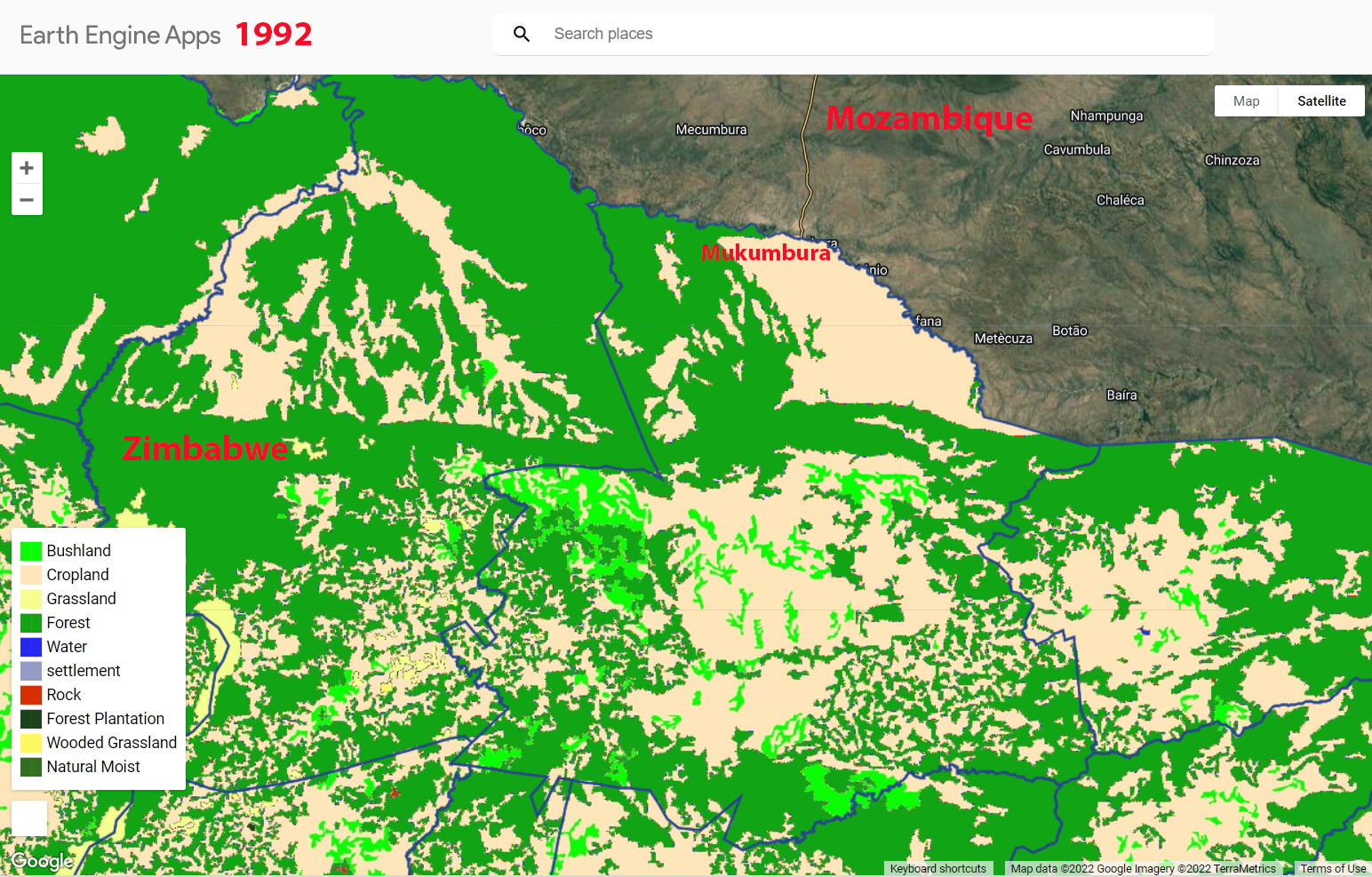 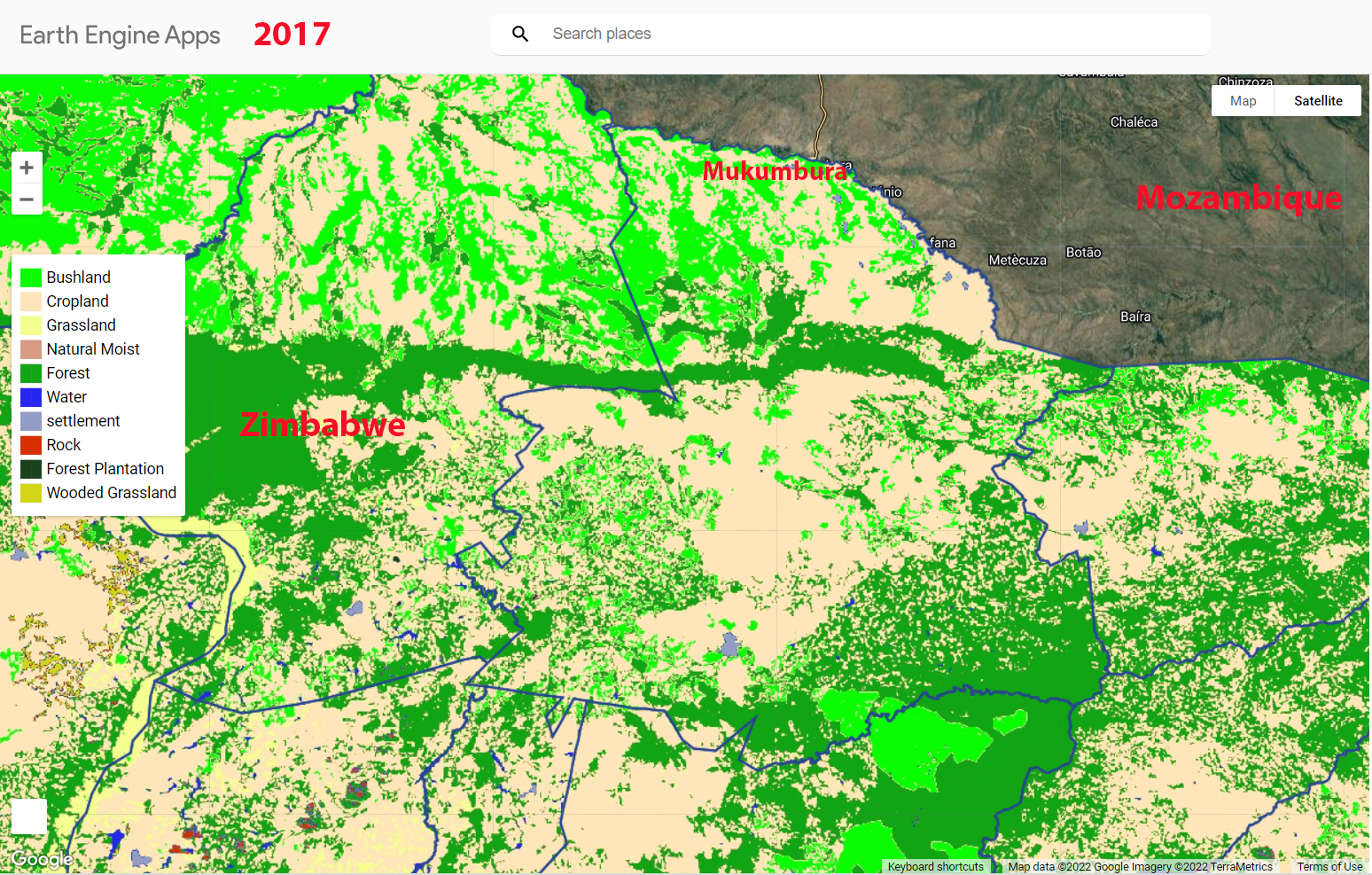 In neighbouring Mozambique, extensive studies were carried out between 2008-2018 using similar Landsat imagery to monitor forest degradation from charcoal production. The studies revealed that this practice is one of the two main drivers of forest degradation, alongside smallholder farming, in many of the country’s major districts in south-western and northern parts. Close to 70% of mopane woodlands in the area studied had been directly “disturbed” by charcoal production.

Zimbabwe’s Forestry Commission has taken a strong stance against the production and trade of charcoal within Zimbabwe. “Firstly, you have to understand that making or selling charcoal is illegal in Zimbabwe,” says Violet Makoto, Information and Communications Manager at the institution.

“We only make provisions to companies involved in the Wattle tree industry, because they grow Wattle trees and only use the bark for making leather tan. So they can make and sell charcoal,” she added.

As Jacob and other charcoal sellers explain, it is unclear even to them where exactly their charcoal materials originate from. “Sometimes we get it on the Zimbabwean side of the border settlement, other times it comes from the Mozambican side,” he says. “It depends on which loot is ready to go when one arrives for collection.”

However, as early as 2018, Mozambique has been working on implementing reforms in its forestry sector to limit illegal logging,  like export bans on raw logs and bans on several tree species including the mopani tree. This is in response to charcoal production being identified as one of the biggest drivers of deforestation.

With deterrent laws around the trade of charcoal, the ways in which so much of it finds its way into Zimbabwe’s (and Mozambique’s) urban areas remain unknown. Accounts from a number of charcoal sellers suggest that the police are willing to accept bribes as they make their way from the remote border post to the urban centers.

“Hiring a delivery truck from the border post to Harare costs between US $85 to US $100,” says Jacob. “You also have to pay as much as US $30 at police roadblocks depending on how many you come across.” However, Forestry Commission agents, according to traders, focus on confiscating charcoal.

When asked if he has considered obtaining a licence from the Forestry Commission that would enable him to trade more freely, Jacob says: “you need too many papers, including a movement permit and a license for selling charcoal.”

In the end, he does not consider it because “my focus is surviving”, he says. Many times, the commission does not even ask for a licence, Jacob added, since they just do not want to see charcoal being sold. “They will just confiscate it without asking any questions,” he said.

The Forestry Commission believes illegal charcoal traders like Thulani and Jacob hide behind the fact that imported charcoal is legal in Zimbabwe. According to Makoto, if charcoal sellers in Mbare had obtained their charcoal in Mozambique, they would be able to produce the necessary permits from immigration at the border post.