Still struggling with COVID-19 crisis, currently dubbed as the new pandemic epicenter, Indonesia is moving forward with its climate targets for the upcoming UN climate negotiations.

However, the plans might be another “business-as-usual”, filled with “good news” and “improvements”, something that is contrary to the surging COVID-19 infections in the country.

Approaching COP26 in Glasgow, UK, in November, Indonesia’s Ministry of Environment and Forestry concluded its ministerial meeting by highlighting the financing aspect of climate mitigation and adaptation efforts.

The government plan is to take on the “lead-by-example” approach,  as they lay out success stories of adaptation efforts in villages (locally called as Kampung Iklim program), social forestry, and mangrove restoration at the climate summit.

These plans, by far, are noble and important climate actions. But COVID-19 undeniably has changed human interaction in this century. Thus, we cannot exclude the pandemic from the climate crisis, as both are interconnected, especially for Indonesians struggling in its coastal, densely populated urban megacities.

Despite being discussed, the government has yet to officially include green economy, for instance circular economy, into the policies and regulations as part to buffer impacts of the pandemic.

Instead, the country issued the controversial Job Creation Law in 2020, which simplified environmental permits to attract investments.

Indonesia, the biggest Southeast Asia economy, has in recent months failed to provide health access and treatments to its citizens, as confirmed COVID-19 cases surpassed 3 million and thousands of deaths across the country.

While battling with the pandemic, the country has been struggling with floods and landslides, a tropical cyclone, and forest fires. While COVID-19 has raged,  hundreds of people have lost their homes, livelihoods, and even their lives.

Over the last year, Indonesia has faced the double burden of COVID-19 and the climate crisis, and neither of these challenges look likely to subside any time soon.

Prior to COVID-19, Indonesia had mapped out its emission plans, hoping to reduce its 2015 carbon emissions levels by  29% regardless of international support, and by as much as  41%  if that support was granted.

The plan also stated that at least 23% of the country’s energy would be sourced from  new and renewable energy by 2025.

In spite of these promises, Indonesia is most likely to miss its targets, partly due to the excessive bureaucracy, contradictory policies, poor implementation and financial support.

For instance, the government was eager to increase renewables into the energy mix, but still clinging onto coal to generate electricity.

On waste management, the 3R (reduce-reuse-recycle) campaign, clean-up activities, no single plastic bags in retailers, have begun to catch on in recent years. Unfortunately, these movements still cannot keep up with the increasing waste volume due to the pandemic.

Looking at the current COVID-19 situation, it is suffice to say that the country is terrible with data and implementation. This is no different with handling the climate crisis.

The Indonesian government’s plan, as much as they are positive, does not reflect on the real situation and excludes the ultimate factor, COVID-19, that has changed the way we interact with people.

He also said that Indonesia is open to investment and technology transfer, including investment for energy transition.

However, the latter seems to be contradictory with the controversial Job Creation Law, issued in 2020, which is strongly opposed by experts and activists for its exclusion of environmental consideration to attract investors.

As COVID and extreme weather hit Indonesia, the country should come up with a plan to address the “new normal” conditions, instead of a “business-as-usual” plan.

In May, the International Energy Agency (IEA) released a report urging nations to stop burning coal and stop new oil and gas fields, in order to reach net-zero emissions targets by 2050. Up to date, nearly 60 nations have pledged to achieve net-zero emissions by 2050, including the US and Australia.

Contrary to other nations, Indonesia announced plans in March to reach net-zero emissions by 2070, with its preparation to kick off in 2050.

Energy experts criticized this idea as a half-hearted effort to deal with the climate crisis. According to them, Indonesia could push forward the timeline if it is serious about developing renewable energy.

The state-owned electricity company, PLN, later announced that it would phase-out coal by 2030 and replace it with renewable energy by 2060. After that, a senior official stated that Indonesia is optimistic about reaching net-zero emissions by 2060 or earlier, not by 2070 as mentioned.

This sounds like the “new normal” for Indonesia, but the country is lacking in implementation. The targets, numbers, or statements are not going anywhere without serious implementation.

The pandemic provides a hard lesson to learn for humans and time to heal for Earth. Social distancing practices change how people travel and mobility. So, this is an opportunity to change the business-as-usual model that is extracting more natural resources and change to sustainable ways.

The upcoming UN climate change summit is going to be a crucial meeting, since it can be the moment that countries like Indonesia step up and show political will to implement real climate solutions.

*The author works as Asia Programs Manager at Climate Tracker

Teenagers in Southern Africa are smuggling and selling deforested charcoal: “The only way to survive”

Dirty fuel: powering nuclear plants could put these communities in Brazil at risk 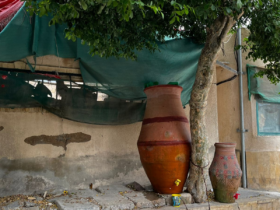 As the country deals with the impact of extreme heat waves, floods and water shortages, with a new minister in charge of the climate change ministry, experts emphasize the urgency for all levels of government in Pakistan to act.

Get to know our 14 fellows from Indonesia, Malaysia, and the Philippines! They'll receive training and publishing opportunities to report on climate and water issues in Southeast Asia.