kazakhstan has one of the cheapest electricity bills in the world, but that has attracted controversial guests: cryptocurrency miners.

BigBlock Datacenter, a French blockchain calculation company, is a controversial guest in Kazakhstan. In 2019, the corporation invested in a cryptocurrency mining farm near the Qapshagay dam, in the south of the Central Asian country expecting the area to become their Eldorado of cheap electricity. But cheap electricity comes at a price: this energy-intensive business can seriously impact the environment. Just as those who looked for Eldorado in ancient times, this thirst for profit is worthy of conquistadors.

Kazakhstan boasts one of the cheapest electricity bills in the world, at just four cents per kWh. This is attracting cryptocurrency miners, an energy-guzzling activity with a heavy carbon footprint. The French miners made their choice in favour of Kazakhstan after failing to settle in Ukraine due to political instability and rising costs.

Low prices and crypto-friendly policies make the largest country in Central Asia a stable and attractive environment for data centres. Moreover, there is no risk of blackouts: power stations in Kazakhstan can produce more energy than the population and current industries require.

“The dam depends on the driving force of the water, which sometimes can overwhelm the demand,” explained the company’s CEO Sébastien Gouspillou. BigBlock’s mining farm in Qapshagay will be able to use up to 45 MW to generate bitcoins for foreign clients.

Mr. Gouspillou specified that his company works with renewable energy and can provide Kazakhstan with jobs and a non-stop, day and night consumption, so that electric companies can make more profit. The French miner sees his business as “a last resort” for the electric market and “an important actor” for the global energy transition.

“Economically Kazakhstan, like any other country, is interested in using the energy surplus, […] or it would disappear as an asset” stated Madi Saken, a senior coordinator in the Datacenter industry and blockchain association of Kazakhstan.

For French blockchain calculation professionals, Kazakhstan seems to have available sources of sustainable energy. However, in February 2020 the Ministry of Energy estimated that only about 2,3% of the whole amount of energy produced in Kazakhstan comes from renewable sources. Citizens still heat their houses with energy that comes mostly from fossil fuels. The choice in the electricity market doesn’t exist for the ordinary urban population.

Emissions and other risks

Cryptocurrency farms are huge energy users. Their data centres contain thousands of processors that work day and night making increasingly complex calculations. The more calculations they make, and the faster they do it, the more money their owners earn. This makes the industry’s carbon footprint into a growing concern.

In 2018 researchers from the Technical University of Munich estimated the annual carbon emissions from Bitcoin’s electricity consumption worldwide to be around 22.0 MtCO2 [similar to countries such as Bosnia or Jordan]. Around 68% of this computing power is located in Asia, while 17% is in Europe.

Data centers also generate heat. “The servers warm up and they warm up their surroundings, so they need to be cooled down,”  said Timur Yeleussizov, a local environmental activist. Cooling down the equipment requires supplementary energy.

There are no figures on greenhouse gas emissions from the cryptocurrency mining industry in Kazakhstan. “Naturally there are bigger factors contributing to climate change. However, the carbon footprint is big enough to make it worth discussing the possibility of regulating cryptocurrency mining in regions where power generation is especially carbon-intensive,” said German researcher Christian Stoll in an article published on the website of the Technical University of Munich.

Though certain international miners claim to be using “100% green energy”, there is one more reason why Timur Yeleussizov can’t find their business harmless. The activist warned about a water crisis risk that Kazakhstan has been running, as its rivers and lakes have been shrinking. This major problem is exacerbated by the use of big hydropower plants.

A new Kazakhstan of data centres?

Even if BigBlock Datacenter shows a commitment to use exclusively renewable energy, there is no proof that other miners do so. According to Alan Dorjiev, a specialist in energy questions and the president of the Datacenter industry and blockchain association of Kazakhstan, most miners in the country are based in industrial regions, such as Karaganda or Oskemen, where the extraction of coal and non-ferrous metals continues to be a major part of the local economy. The electricity provided there partly comes from coal power plants.

People living near heavy industries have already been suffering from air pollution and health problems. For Alexandra Osipova, a blogger from Oskemen, people in her city live in “an aggressive environment”. “You can feel the aftertaste of metal [in the air] while walking around,” she said. The local news media lack information on cryptocurrency mining and its potential damage.

Madi Saken claimed that the fact that Kazakhstan doesn’t use a lot of clean energy “is not a problem of the [cryptocurrency] mining market, it is a problem of the energy infrastructure. In that way you can criticize any business, which somehow uses energy”.

Cryptocurrency specialists seem to have their vision of a better future. In Dorjiev’s opinion, “if we replaced all the industries with the industry of data-centres, everything would, in effect, become cleaner”. Dorjiev suggested, as carbon emissions from mining, for him, are certainly lower than ones coming from plants and factories. According to him, since the Coronavirus crisis hit industries in the region, miners in Oskemen have been saving jobs by buying a part of electricity before consumed by the Ust-Kamenogorsk titanium and magnesium plant.

“With progressing digitalization, there is a need for more and more data centres – which will seek places with cheap (and ideally clean) electricity. However, traditional energy-intense industries will not leave such places for the same reason, ” Christian Stoll stated.

For Roman Chestnykh, an environmental engineer from Oskemen, if companies make a profit in a country with old energy infrastructure, “it is necessary to invest money in changes of the energy system, in modernization:  to make a transition to renewable sources or to finance gasification in regions”.

This story has been updated at 12pm (GMT+1) on 3 November, to correct the mistranslation of one of the quotes. 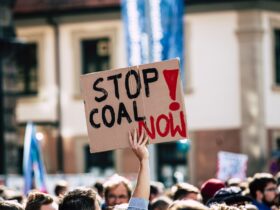 The country’s negotiators were demanding the text include a phase-down of oil and gas.