A return to the centuries-old agricultural practices of growing lemons is yielding economic and environmental benefits for the Amalfi Coast.

Not all tourists who pass the Amalfi Coast know what’s behind the infamous terraces that cover the region. The green mountain view can go unnoticed by the hypnotizing blue colors of the Tyrrhenian Sea, but hidden within the vertical gardens that structure the edge of Italy’s coast lies ancient knowledge of past and present gardeners. The pergola, a wooden structure that secures branches and positions leaves at the top to allow shade, creates the perfect microclimate for growing lemons. This is the legacy of the Amalfi growers of the past that inspires young farmers of today.

Located in the province of Salerno, in the southern Italian region of Campania, the Amalfi Coast has been a UNESCO World Heritage Site since 1997. This has given the possibility for visitors to travel back through time to an ancient past with houses in terracotta colors and lemon gardens, both vertically stacked, touching the sky. Besides their panoramic beauty and iconic imagery, these fruitful plants have another function, they help sustain the mountains and save the environment.

Geologist Vittorio di Benedetto is a local geologist who researched this issue after several disastrous landslides that took place last winter. According to him, “the dry stones and related terraces, arranged parallel to the contour line with the agricultural products, imply an excellent work that has reduced, [although] not entirely stopped, the erosive action of rainwater and gravity acting on the steep and unstable slopes.”

Benedetto explains that these landslides happen more frequently due to a changing climate in the region, which has brought too much rain. Combined with the abandonment of gardens, which is the main source of irrigation of the soil and support of the coast, is adding to the unstable environment. For years, growing lemons was the main engine moving Amalfi’s economy. Most workers conquered the small, steep parcels of land through hard work. Today, the scenario is different. Lemon terraces are abandoned every year and the numbers joining the centuries-old tradition of carrying lemons literally on their backs is falling. There are seemingly no prospects to continue the work.

Many worry the days of the beautiful lemon trees are numbered, but there are still those taking to the hills to save the coast and history. Salvatore Aceto is one of them. Aceto comes from five generations of lemon and fruit gardeners and has worked in the groves since he was a little boy. Salvatore did not initially pursue a farming career, his father encouraged him to study, so he pursued a degree in accounting sciences. He opened his own successful company, but its peak in 2008, his father, Gigino Aceto, asked him to help manage the family farm.

With the arrival of Salvatore and his entrepreneurial and marketing know-how, the Lemon Tour was born. Salvatore and his brother, Marco, launched an educational agricultural tour of the lemon gardens to those who were interested in knowing the work and history of its tenders.

Further expressing their commitment to agricultural education, the brothers are now are part of a project called Amalfi 365 that helps young people who want to start a company in the agricultural tourism sector. They want to pass on all the knowledge that their father gave them and help keep the tradition alive. With the same vigor, Gianmarco Aceto, Salvatore’s son, is pursuing a degree in agriculture at the University of Naples. He hopes to help create a new generation of lemon horticulturists who will impact the economy, the community, and the environment in a positive way.

Viviana Bottone, from Minori, is a writer and ex-waitress who also decided to go back to the garden. She cooks lemon jam and prepares tomato extract from their garden. She started the process little by little. Her idea was to cook real food for her children, then her family, and today, for almost a year, she has been selling her products to local people and to tourists. “It is like giving gifts to those who gave us this land. We grow and transform without pesticides, everything at zero meters [above the sea level], because the first terrace is right here”, she says pointing at the grove nearby.

Italy has been one of the countries hit hardest by COVID-19 with some of the strictest quarantine measures put in place. One of the only professions that didn’t stop was agriculture. Thanks to this new business Vivianna created almost a year ago, her family worked during quarantine and guaranteed income. She highlighted her optimism for future generations, “I hope that my children recognize this work and take this idea forward. I do not pressure them to come to the garden, but I remind them of how important it is.”

Salvatore and Vivianna’s stories could be the last of a family of gardeners returning to their origins, however, something is changing in the Amalfi coast as more and more become aware of the importance of lemons in the region, the history they hold, and the environment they hold together.

Back from the dead: a local initiative is saving fallen trees in India’s most populated city

“Our forest is our life”: Pacific indigenous tribes joined forces to save rainforest from loggers

And as a response to the city’s waste crisis, the local government of Davao City plans to construct a P2.5 billion waste-to-energy (WTE) facility, funded by a Japanese loan, on a 10-hectare property in Biao Escuela in the Tugbok District. 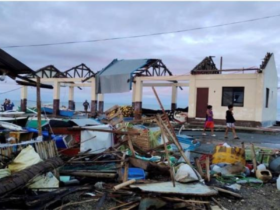