With forests serving as carbon sinks and approximately 85% of Guyana’s landmass covered in forests, coupled with a low deforestation rate, there was an approach to monetise the forests.

What has been heralded as a historic carbon credits deal for Guyana is now the source of a pitched battle between the government’s climate office and some Amerindian activists over whether adequate consultations were held.

Last year, the Guyana Government announced that the Architecture for REDD+ ((Reducing Emissions from Deforestation and forest Degradation) Transactions (ART) issued and certified Guyana with over 33 million carbon credits for sale. With forests serving as carbon sinks and approximately 85% of Guyana’s landmass covered in forests, coupled with a low deforestation rate, there was an approach to monetise the forests.

The announcement attracted mixed reactions from leaders and activists in the indigenous community, with some waiting to be convinced that the sale of credits will translate to climate justice and transformational benefits for communities at the forefront. By purchasing carbon credits, companies and governments with high CO2 emission rates are granted permission to generate one tonne of CO2 emissions per credit.

Under the sale agreement with oil company, Hess Corporation, Guyana stands to earn US$750m over the next 10 years. It has been declared that 15% of the earnings will return to indigenous communities to fund local economies and infrastructural projects.

It was reported that Hess will purchase the first 30 per cent of that amount for a minimum of US$750 million over a ten-year period. However, while the agreement period is from 2022 to 2032, the government says that it was able to negotiate a ‘legacy credit’ amount of 12.5 million credits at US$15 per tonne, thus receiving a US$187 million for the period 2016 to 2020.  Some US$75 million is already in the account and the remainder will be paid within 18 months.

That money, which is payment for carbon emissions by Hess, a mega emitter, will be used to improve community lifestyles through infrastructure and sustainable projects as a means of climate justice. However, judging from past experiences, some activists remain skeptical about the type of benefits that will be transferred to the local communities. They shared the view that some communities are still to fully benefit from royalties promised to villages from agreements made under past governments.

“We have seen how the government would have acted in the past… not honouring their commitments to our indigenous communities. Many communities have mined for gold and other resources but they are still to benefit from these extractions,” indigenous leader Lemuel Thomas said.

The sale of carbon credits to mega emitters in Guyana is being used to achieve climate justice and to cushion the impacts of severe environmental damage. Locally, this is another programme from which indigenous communities are expected to benefit from as the pristine forest, which traps emitted carbon falls within indigenous people’s lands. Communities in Guyana hinterland, within the past decade, have been devastated by unusual climate patterns exposing them to uncommon flooding, droughts and extensive threats to food security among other problems.

At the announcement of the sale in December, the National Toshaos’ Council Chairman, Derrick John, said the deal signals exciting times for indigenous communities across the country. “I hope that all our communities will familiarise themselves with the other investments that will come to our communities, which will be extra to the 15 per cent and will run nationally – for things like renewable energy, better connectivity, improvements for agricultural and other job creation opportunities, and continuing the land-titling programme for those communities which are still working towards getting their titles,” John said. On the contrary, other indigenous activists and leaders have lashed out at the position, contending that the communities were not a part of the deal and were not favourably consulted.

Senior Director for Climate and REDD+ in the Ministry of Natural Resources, Pradeepa Bholanath, in response to these concerns said climate justice has been the cornerstone of Guyana’s work on the Low Carbon Development Strategy (LCDS) since 2007. Through LCDS 2030, she argued climate justice continues to be at the forefront where climate financing will address community and national impacts of climate in an equitable manner, recognizing the disproportionate impacts of climate change on Guyana’s coastal and hinterland communities. Nevertheless, Indigenous Rights activist, Dr. Laura George contended  that the government has failed to include the Free, Prior, and Informed Consent (FPIC) process in their consultation on the sale of credits. She charged that the consultation the government claims to have executed was done during the drafting process for the 2030 Low Carbon Development Strategy.

“Our communities are clueless as to what this means for them. How can they benefit from any form of justice when they were not a part of the consultation process?” George questioned. Noting that indigenous people are protectors of the forest, she believes through consultation they could have gotten a better deal than 15%. “They have never agreed 15% is adequate… all the consultations were done in the LCDS… there was no independent consultation on this and what it will mean for the communities.  Here again, the government has failed to implement the FPIC,” she posited as she made her case on why she believes climate justice for indigenous communities is a far stretch.

Bholanath contended that there was robust consultations with over 200 Amerindian villages over a seven-month period during the LCDS 2030 draft. “In every session held during the community consultations, the proposal for jurisdictional scale engagement in the forest carbon financing mechanism with ART TREES as the standard was presented and discussed with community feedback received. As a result of this feedback, the initial ideas presented in the draft of October 2021 were changed and significantly enhanced because of feedback received by those who participated in the consultation, including people from communities’ right across the country,” she outlined.

As a result, the finalized LCDS 2030 sets out how villages will create their own development plans and can choose who to engage with the benefit sharing mechanism. George posited that questions remain on the financing mechanism of the funds and their disbursement to communities. If there had been consultations, she said decision-makers would have had the opportunity to understand the specific needs of communities. She added that it will also inform policymakers of concerns and issues communities face and prevent decision-making from being a “top-down” approach. “Refusing to understand the needs of the indigenous peoples, in my view, is disrespectful and a violation of our rights… we cannot continue with the top-down approach, there is no justice in that,” she highlighted.

South Rupununi activist, Immaculata Casimero, like George, believes that there should be some explanation of how the financing for projects will work. “There should be a proper mechanism or system in place so we can really know how this money is being spent and how communities are benefiting from this funding,” she stated. The activist expressed concerns since they are yet to see the Amerindian Fund, which was solely for the benefit of the Amerindians of Guyana properly accounted for. She believes the fund should have been independently monitored and be free of political influence. Bholanauth explained that the revenue sharing mechanism for the receipt of carbon credit revenues was designed during the seven-month national consultation on LCDS 2030. The plans, she noted, are based on priorities identified by villages themselves, not by the Government. In some cases, they will be new plans, whereas for  others they may be updates of pre-existing plans.

The dedicated 15% of revenues will be supplemental to investments received under national and multiple-community programmes.

“Because they will be led by villages, village plans will vary, but previous experience suggests that villages will likely prioritise areas such as community infrastructure and communications; livelihood opportunities; nature and environment; education and health,” she said.

She also noted that within the next few months there would be the implementation of village plans and rolling out of carbon financing. “This, in our view, is empowerment from the ground up, to lead in every sphere of low carbon implementation to transform village livelihoods,” she added. But, Thomas, who is also Toshao of Kamarang in the Upper Mazaruni District added, “(You are) saying we are the protectors of the forest but if we don’t have a voice in the decision-making, we cannot achieve no justice.”

His community, he said, has witnessed the destruction left behind by overtopping from rivers and flooding as a result of increased rainfall. The phenomenon has placed his village and surrounding communities in a tough place with their food security being threatened as a result of unpredictable weather. He opined that a portion of financing should be directed towards developing food security programmes in the hinterland.

Thomas further posited that in order for communities to be benefactors of the carbon sale, they must be informed and consulted on the process.  He said too, there should be an assessment of community needs and forestry stocks. Chenapau Village, Region 8 resident and activist, Michael Mc Garrell echoed similar sentiments. Pointing out that his village forms part of the forest from which carbon credits will be sold, he believes they should have been properly consulted. He explained that many of the villagers are unaware of what the sale of carbon credits would mean for them and how they can benefit.

With limited knowledge of the agreement, he opined that villagers will not be able to bargain appropriately for their village needs. In this regard, he stressed they are likely to be at a disadvantage and will not effectively benefit from climate justice. “I will say no, we will not be able to access climate justice from this agreement. I have seen how governments acted in the past and handed down top-down decisions,” he said. Chenapau, located within the Kaieteur National Park, experienced extremely high levels of flooding in 2017. With restrictions imposed as a result of the park boundaries, they are also unable to effectively use the environment for their survival as they are barred from engaging in economic activities in the park. At the announcement and sale of the carbon credits to Hess, it was disclosed that all the monies will be deposited into the special Carbon Credits account and used on projects and programmes, designed for Guyana’s climate mitigation efforts in its Low Carbon Development Strategy (LCDS).

Nonetheless, Casimero, a native of Aishalton in the Deep South Rupununi said she is optimistic that the financing directed towards the villages under the agreement will enhance the lifestyles of the people. She posited that with the development of sustainable village plans, through financing from the sale of carbon credits, villages will be in a position to fund projects that will enhance their lifestyles and somewhat bridge the gap between the coast and hinterland.

This story was originally published by Starbroek News, with the support of the Caribbean Climate Justice Journalism Fellowship, which is a joint venture of Climate Tracker and Open Society Foundations. 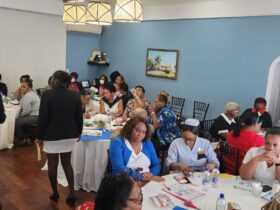