India’s net zero 2070 deadline is 20 years later than the promise made by the UK, US and other high-income countries.

By the evening of 1 November 2021, India had captured the spotlight in Glasgow. India’s net zero by 2070 target took front page news, which meant that all major economies in the world now planned to reach zero emissions. To meet this target, India is already setting up some major renewable infrastructure projects.

India’s 2070 date is 20 years later than the promise made by the UK, US and other high-income countries to achieve net zero emissions by 2050. It is also a decade later than China, Russia and Saudi Arabia’s pledge to achieve the targets by 2060. However, according to Gagan Sindhu, Director of the Center for Energy, Environment and Water, Centre for Energy Finance (CEEW-CEF), “A lot of people were not necessarily expecting Mr Modi to announce a net zero.” Just a few days ahead of  COP26, India signed a statement with 24 other countries criticising the inequitable calls for net zero by 2050 from developed countries, referring to it as “climate injustice.”

Reports have suggested that India’s goal of reaching net zero carbon by 2070 does indeed represent a path towards sustainable development, but it also means the country will need a lot of renewable energy. India is the fourth largest carbon emitter, after China, the US and the EU. With a population of 1.38 billion, the country has very low per capita CO2 emissions, at 1.9 tonnes per person in 2019. This is small compared to the UK’s 5.5 tonnes or the 16 tonnes per capita the US emits.

Though the details of India’s targets are yet to be disclosed, prime minster Modi has employed the term panchamrit (food used in Hindu and Jain worship comprising five ingredients) to announce the five-point package of measures to achieve green targets by 2030: increase non-fossil energy capacity to 500 GW, fulfil 50 per cent of energy requirement using renewable sources, reduce carbon emissions by one billion tons, reduce the carbon intensity of its economy by 45 per cent and achieve the net zero target by 2070. Achieving the 2030 target alone implies the deployment of more than four times its current renewable energy capacity. However, several questions remain as to how the country is planning to phase out coal production.

Beyond announcing the net zero target, India has used the opportunity presented by COP26 to try and secure funds to set up some of the required infrastructure for the future. During the summit, prime minster Modi called for a $1 trillion fund for developing countries to fight the climate crisis, and raised concerns about the commitment of other countries, “we should be increasing pressure on the countries who are not able to honour their promises.”

In addition, Modi launched a number of cross-border renewable energy projects, such as the solar infrastructure project One Solar, One World and One Grid and the Green Grids Initiative, a plan to create an interconnected solar power grid. According to the official statement, this grid will help countries connect to a power source and aims to reduce the dependence on the sun for solar energy by feeding extra solar energy into a grid system . The plan, backed by more than 80 nations, could see excess renewable power being sent to areas with deficits.

Gagan Sindhu supports this development saying, “Similar solutions exist on a smaller scale”. Viking Link is one such initiative, involving the UK and Denmark sharing wind power generated via a transmission grid spread over 760 km of submarine cables.

Dr Gerhard Salge, Executive Vice President and Chief Technology Officer at Hitachi Energy, expressed the excitement of other countries about this new announcement. “Modi’s announcement is totally in keeping with the vision that the companies have. Such cross-border interventions not only benefit India, but help with the faster deployment of technology,” he said.

Sindhu, for his part, said these infrastructure projects work because the climate crisis itself is a global issue. “Inherently, when we are grappling with issues of such magnitude, it is natural that solutions and opportunities will be of a cross-border nature,” says Sindhu. In addition to investment and infrastructure, India’s space agency, the Indian Space Research Organisation (ISRO), will generate and disseminate satellite data and predictions  for small island nations to strengthen and increase preparedness in these countries.

India also launched the Infrastructure for Resilient Island States initiative (IRIS), which aims to support sustainable infrastructure that can withstand climate shocks, thus protecting lives and livelihoods.  IRIS is the first major programme to be launched under the international partnership Coalition of Disaster Resilience Infrastructure, initiated by India two years ago.

“It’s not possible for any one country, no matter how big or wealthy, to insulate themselves from this environmental crisis or solve it alone. Ultimately, effectively demonstrating international leadership on the climate front can bring benefits that extend to other areas as well,” adds Sindhu.

This story was originally published on Friedrich-Ebert-Stiftung, with the support of Climate Tracker. 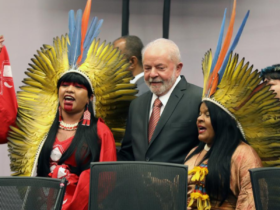