The Amazon forest is the world’s largest tropical forest.No other place in the planet has more animal and plant diversity. But the Amazon is more than that. It is also an important regulator of  climate in all the region. What happens there has a direct impact in places across the continent, starting from Brazil. The drought that almost took São Paulo to a state of emergency in 2014-15 was likely to be related to deforestation in the Amazon forest.
How can it be so?

From water to water

Around 20% of all freshwater in the planet discharges into the oceans through the Amazon river. The thick vegetation of the region is critical to retain all this water here. It does so by means of a phenomenon called “evapotranspiration”, by which the plants and trees transfer water from the land into the atmosphere. It has been calculated that about 35% of the rain that falls in the Amazon is recycled – it goes from the land back into the clouds through trees and plants. So there’s a virtuous loop in place, here: the forest retains water and stimulates local rainfalls, which in turn keeps the forest vigorous. 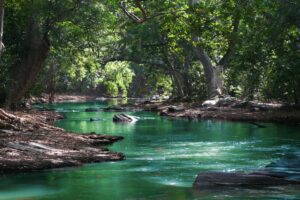 Rainfalls in large parts of  South America depend on atmospheric moisture that comes from the Atlantic ocean. After crossing the Amazon basin, the moist winds are blocked by the Andes and funnelled southwards.
These rainfalls are critical for the region as they feed Brazil’s agribusiness industry, which constitute a big chunk of the country’s GDP. Further south, a recent study estimated that 70% of water resources in the Rio de la Plata basin, depend on evaporation from the Amazon forest.

In the Amazon region there are only two seasons per year, dry and wet, each lasting  six months. Scientists have found that the forest itself plays an important role in regulating the transition between the two.
The intensity of rains and the duration of the dry season are critical aspects for the rainforest vitality. Although droughts and floods are natural events, they are becoming unusually extreme in the last years, posing a threat both for the forest and people that live in it.

A 2015 study modelled how deforestation and greenhouse gas emissions can alter the rain pattern in the region. The combined effect of both could cause a 32% decrease in rainfalls and a 2-4 Celsius degrees increase in temperature.  As the integrity of the Amazon forest is vital to regulate climate in the region, the impact of deforestation goes beyond the destruction of biodiversity.
Researcher Oliver Philips, from the University of Leeds applied has focused on beneficial roles of natural resources stating that ” so far – we have been getting a free ride, with global forests and oceans mopping up more than half our carbon waste.”. In fact, the Amazon has a fundamental role in absorbing atmospheric CO2, the most important greenhouse gas. But this could change. And if it does, things could get ugly.