Environmental defenders in Latin America put their lives on the line to protect the Earth. Meet our fellows who will share their stories.

Environmental defenders in Latin America live in the most deadly region for what they do, according to the Global Witness report. From 2012 onwards, the region has led the data for murdered land defenders. Recent data shows that more than one in 10 defenders killed in 2019 were women.

Women environmental defenders face specific threats, including campaigns focused on their private lives and sexual violence. They are also particularly vulnerable to the negative effects of climate change, as this accentuates gender inequality and discrimination.

That’s why, together with FES Transformación, we put together a group of journalists from the region to spotlight climate justice and improve the visibility of women environmental defenders in the public debate, as a key aspect for climate action in Latin America.

Minerva is an investigative journalist with special interest in indigenous affairs, socio-environmental conflicts and forced migration reporting. She is part of the investigation team at “Fundación Gumilla”, an organisation devoted to social and environmental justice. She is the author of the book “La fuerza del jebumataro: historias de despojo y fortaleza de la Venezuela indígena”, a compilation of ten years of research and coexistence with indigenous peoples. Minerva was granted with the Award for journalistic excellence SIP 2020 in the category HUMAN RIGHTS AND SERVICE TO THE COMMUNITY for the work Fosas del silencio.

Minerva wants to create networks to make the situation of women defenders visible and achieve protection mechanisms both for them and for those who document their stories.

Azul holds a degree in Social Communication and has a specialization in gender and equality policies. She was awarded the “Marcelo Jelen” National Written Press Award from Uruguay in 2017. Currently,  Azul is a writer at LatFem and the Jumanji ecofeminist monthly newsletter. She collaborates in the Uruguayan weekly Brecha. She is the producer and host of a podcast on Radio Mundo Real. Azul is part of the Network of Feminist Journalists of Latin America and the Caribbean.

Since she was a kid, she was interested in news coverage of human rights violations and how organizations and communities fight to defend themselves. As a chronicler, she enjoys being able to access the most diverse life stories and tell them so that other people feel inspired.

With a master in Public Policies, with a Specialty in Migration, Development and Human Rights, Gabriela currently works as an independent journalist for several media outlets in the region. In 2017, she obtained the First place in the Eugenio Espejo National Journalism Award in Ecuador. After living in Mexicali for seven hot summers, she says she isn’t afraid of hell. Her main concern is living and writing intensely.

Gabriela seeks to develop narrative strategies that help to understand, surprise and encourage readers on environmental and human rights issues, and hopefully, to transform our behavior in favor of caring for people and defending the earth.

Greta is a journalist with a special interest in environmental issues. She is worried about climate crisis and is aware that her veganism, recycling, composting, and used clothing have a ridiculously marginal impact. That is the reason why she is into climate journalism. She has worked in the media The Clinic, El Desconcierto, Paula Magazine, Vice and MediAmbiente. In different formats, she investigates about childhood, ecology, feminism, health and Human Rights. Two of her articles have been published in the books “El mejor periodismo chileno” and “Chile crónico 2020”.

With a team, she created the children’s journalism series Respirantes, on the health impacts on girls, boys and adolescents living in the sacrificial zones of Quintero-Puchuncaví. Currently, she expects to experiment with new publishing formats and contribute to the cause of the Kawesqar people.

Esther Paola says she isn’t herself when she is not reporting. She likes to listen to stories and understand the why of each case. That is how she found Muy Waso, the first feminist digital magazine in Bolivia. Esther Paola feels comfortable in front of cameras, as well as anonymous among thousands doing her work. She was a fellow at the Deutsche Welle Akademie. She writes because she believes in the rigor of the letters and their charm at the same time. Passionate about issues that bother those who have only two things: power and money.

Esther Paola hopes to ensure that the population is better prepared to challenge their authorities, and hopes to do it while involved in this fellowship.

Juana works in a local newspaper and in a small radio station, where she does columns on climate and gender. This is the first thing she does on a professional level. Environmentalism and feminism changed her life. On a daily basis, she has adopted all the environmental habits she knows: she is a vegetarian, she makes compost, she consumes agro ecological products, she tries not to eat ultra-processed products and if she buys clothes, it is second-hand.

Juana hopes to make an impact. Her great challenge is to get people from the big cities of her country to read the story of a town in Catamarca and understand why they should not be indifferent.

Jody has been a journalist for nine years. He began his career covering criminal proceedings and touring the courts of Guatemala. He then began conducting investigations related to politics and corruption. In recent years he has covered environmental and migration issues. She was a fellow of the United Nations Organization and since 2021 is a fellow of Climate Tracker. Currently, Jody works as a freelance journalist in media outlets of her country.

Jody hopes to make visible the story of the women who are defending rivers in Guatemala and denouncing the abuses of power around natural resources.

Juan Manuel is a journalist and currently works at La Silla Vacía, a medium specialized in power in his country. Before that, he was sub editor of the newspaper El Tiempo, as well as a reporter for the international area of ​​the newspaper El Colombiano. He has written on various topics. About a hurricane that devastates an island in the Caribbean, about political ambition and the weight of bearing a name, about a Christmas carol sung on the riverbank in my city. He believes that no story should be indifferent to journalists.

Within this fellowship, Juan Manuel hopes to carefully watch and narrate the story of the environmental leadership of women who oppose the Ituango hydroelectric plant in Antioquia.

Years ago Anthony discovered his passion for literature. “But you can’t live from writing little stories” , ironically said his mother. “But maybe from writing news” suggested his grandfather, who made him read the first red headline of his life, “Vampires sell blood for 200 soles.” After five years of studying journalism and three as a graduate, he says he still can’t headline like that. Juan Manuel currently collaborates with Convoca.pe and is editor of the magazine Posdata.pe.  He writes, reports, teaches, learns, plays Dota 2, and does nothing when he can.

Anthony hopes to offer solutions from research, reflection and the correct interpretation of the Escazú Agreement.

Jessica was born in Curitiba, in southern Brazil, but what she really wanted was to have been born in a hot place with beaches, forró and samba. She has been enchanted with people and their stories since she can recall. Jessica enjoys showing the world and all the beauty and diversity living on it, and she uses journalism and art to do it. She says that combining those two things is what really makes her smile. She is a freelance journalist but currently Jessica is a trainee at the newspaper Estadão. She likes to write texts (especially long ones) about gender, diversity, culture and human rights.

Jessica wants to contribute to the visibility of traditional Brazilian communities, mainly seeking to value their ways of life and pay attention to the lack of guarantee of their rights.

Greta is a documentary photographer, journalist and educator focused on gender and human rights issues. His work focuses on exploring social boundaries and re-historizing the body in a situated way. Through her images she reflects on coloniality, gender culture, violence, and trauma.

Journalist, fan of chilaquiles and dogs. For 10 years she has been working as an investigative journalist on gender, health and human rights issues. It is part of feminist initiatives that bet on the construction of a feminist internet.

Anaiz hopes to contribute to the recognition of the protection of women defenders of the territory, since they are the ones who take care of and protect life and build other possible worlds

Carmina lived in the countryside until she was 15 years old and plans to return. She has been a journalist specialized in science, health and the environment since 2014, with a background in biology. She traded in the gown and flask for the pen and storytelling. She was a scriptwriter and host of the TV program “Donde se hace la ciencia.” Her written work has been published in El Universal, Todo sobre el Espacio, México Desconocido and the Planeteando blog. She loves working in a team, as well as experimenting with media and new formats. She is currently a journalist and fact-checker at Pictoline.

Additionally, she writes for SciDev.Net and Tec Review. She has been a fellow in programs of the Thomson Reuters Foundation, the Council for the Advancement of Science Writing in the United States, and the International Women’s Media Foundation. She has obtained 4 national awards for science communication and in 2020 she was nominated for the Fetisov international journalism award for the best investigative report. In her spare time she enjoys preparing vegetarian recipes and she likes to dream of a journalism environment that contributes to social justice.

We’re excited to see the amazing stories each of our fellows will tell to raise the voice of environmental defenders in Latin America.

A town in India is using solar panels to protect crops 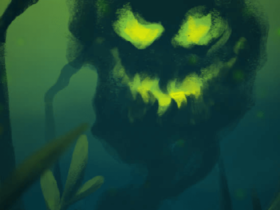