A delegation made up of 10 indigenous women from Mexico, known as the Defenders of the Earth , attended COP26 to demand that the voices of the peoples who defend the environment and territory be heard. What do they do, what do they think and what do they want?

In the Telegram groups made up of activists who attended the United Nations Conference on Climate Change, there is a recurring complaint: the problems of accessibility to the largest global discussion event on climate change. To enter the convention center it is necessary to queue up to two hours, and there is a single entrance through which more than 15,000 people must pass per day.

But it is not the only problem: a few days before the start of the event, the Presidency of COP26 – exercised by the United Kingdom – announced that it would limit the number of observers who can witness the negotiating rooms. In this way, elements such as transparency in the processes and the democratization of information were systematically forbidden for most of the attendees. A door that is too small, in the face of a very big problem, constitutes a great metaphor for what social organizations dedicated to environmental problems have been denouncing for years: the inclusion of civil society is scarce.

This year, a delegation made up of 10 indigenous women from Mexico – known as Defenders of the Earth – attended COP26 in Glasgow, Scotland, to demand that the voices of the peoples who defend the environment and territory be heard.. The main claim of Mitzy Violeta Cortés, Rosa Marina Flores Cruz, Wilma Esquivel Pat, María Tzuc Dzib, Wendy Monserrat, Miryam Vargas, Erika Hernández Mariaca, Florina Mendoza Jiménez and Armanda García Carrillo is the recognition of indigenous peoples as defenders of 80% of biodiversity on the planet, and its inclusion in decision-making processes. In the last two weeks, the group participated in various talks and mass mobilizations. Here we tell you their objectives, claims, as well as the contradictions they see with the current Mexican government.

Itaxavi Mendoza belongs to the Ñuu savi community in Oaxaca. He began to get involved with environmental activism after perceiving the consequences of mining extractivism in his territory. Shortly after, he decided to get fully involved in the defense of water, after his town suffered a forced displacement. The activist – specialized in the recovery of the language and territorial memory – is one of the Defenders of the Earth who went to Glasgow this year. For her, Glasgow is the perfect setting to draw networks with other environmental references, and learn about the problems present in her territory: “we seek to generate alliances that allow us to strengthen each struggle and thus form a greater force capable of countering the impositions of COP26”, he claimed.

In 1982, the Afro-American activist Benjamín Chavir defined environmental racism as the manifestation of racial discrimination in the development of environmental policies and the application of regulations and laws.. For him, the deliberate selection of racialized communities for the installation of toxic waste, the official sanction of the presence of poisons or other contaminants that endanger the life of a population and the systematic exclusion of black people in the leadership of movements environmentalists, are clear manifestations of this dimension. At present, the term is more current than ever, and it is essential to understand approaches such as Defenders of the Earth. Regarding this, Mendoza commented: “The effects of racism around the climate crisis are devastating. Indigenous peoples take care of 80% of the planet’s biodiversity, and excluding them from making decisions about solutions to mitigate the effects of the climate crisis will lead to a catastrophe. The outlook is critical ”.

But it is not only about exclusion or discrimination. According to the 2019-2020 annual report prepared by Amnesty International (AI), Latin America is the most dangerous region in the world for human rights defenders and, in particular, for those who protect the rights to land, territory and the environment. Of the 304 murders worldwide, 23 occurred in Mexico. The country ranks third among the riskiest in the region, only surpassed by Colombia (106) and Honduras (31). Gender-based violence is also present in the numbers: 13% of the murdered defenders were women.

Miryam Vargas is another of the women who are part of Defensoras de la Tierra. He is 33 years old, is of Nahua origin (from the Cholulteca region), in Mexico, and is part of the Puebla-Tlaxcala-Morelos Peoples Front. He works as a journalist, and usually covers issues related to caring for the territory and resistance processes. Regarding the environmental problems of his region, he explained: “Companies and governments are organized and have very clear attack strategies against defenders of the territory. A common practice is to generate conditions of violence within the communities so that when projects that can be harmful to the environment arrive, a social crisis occurs, the community fabric is broken, and it is easier to set up a business without the need for go through assemblies. “

In addition to the violence against territorial leaders, in Mexico for several decades scientists, indigenous communities and members of non-governmental organizations have been warning about the high levels of deforestation, the loss of biodiversity, the pollution of rivers and seas, and the existence of a large number of megaprojects that have a negative impact on the territories.

Last week, the president of Mexico, Andrés Manuel López Obrador, justified his absence at COP26. In a press conference, he affirmed that many promises are made at the summit, but there are few concrete actions: “Enough of hypocrisy and fashions, what you have to do is combat the monstrous inequality that exists in the world,” he said. In addition, he added that there is a double discourse between the heads of State and Government who decided to concur to the global agreement. “At the same time that these summits are being held to protect the environment and confront climate change, the most powerful countries are increasing the production and extraction of oil,” he concluded.

There is a quota of truth in the words of López Obrador. In December 2015, the Paris Agreement was signed where 189 countries committed to generating actions and programs to reduce greenhouse gas (GHG) emissions as much as possible and achieve climate neutrality by 2050. However, the treaty It only entered into force on January 1, 2021, that is, five years after its approval. Meanwhile, a report from the United Nations Environment Program made it clear that, in 2019, global greenhouse gas emissions increased again for the third consecutive year, reaching an all-time high. The evidence is clear, for most governments, climate change is not a priority issue, or one that requires urgent measures.

But everywhere there are contradictions and AMLO’s environmental policies are not without criticism. As the Financial Times pointed out , the López Obrador government has spent several million dollars in the construction of “Dos Bocas”, a giant oil refinery and the promotion of hydrocarbon production. In addition, in October of this year, an Electrical Reform was presented to Congress that proposes to block the generation of energy from renewable sources by private companies. In this way, the leadership of the sector would remain in the hands of the Federal Electricity Commission. The problem is not the nationalization itself, but the consequent setback in terms of energy transition.

Although López Obrador was not present at COP26, he did send official representatives. Mexico was one of the countries that adhered to the declaration for the protection of forests and land use. Outside of that, no major advances were announced.

For Wilma Esquivel, territorial communist feminist of Felipe Carrillo Puerto, and member of the delegation of Defensoras de la Tierra, one of the problems of these summits is in the representation: “The problem is that these people have an official discourse. They are not involved in processes of defense of the territory, but in the legitimization of the actions, status and government plans. They have no intention of solving our problems, nor do they respect indigenous peoples and communities ”. Finally, he concluded: “Their participation is dangerous. What they are looking for is to approve megaprojects based on simulated consultations. Those of us who are part of the resistance know that their proposals are destructive to the environment, and contribute to increasing violence in the territories ”.

The United Nations Conference on Climate Change started almost two weeks ago. In the first week, the main event was the World Leaders Summit. There were agreements related to the problem of deforestation, the use of fossil fuels and coal. As was implied in the speeches of the women who make up Defenders of the Earth, there is still a great distance between the proposals of climate activism – made up mostly by young people, indigenous peoples and civil society organizations – and the agenda imposed by the leaders. Within the negotiating arena, politicians and businessmen make the decisions that will determine the future of the planet. In parallel, millions of people take advantage of the occasion to debate what strategy they will take once the agreements are not fulfilled, or if they do not adjust to the real needs of the territories. The case of Defenders of the Earth is a perfect example of this, but it is not the only one. Paraphrasing one of the most famous graffiti of the French May: “Beauty is in the streets.”

This story was originally published on Distintas Latitudes, with the support of Climate Tracker.

Julieta Bugacoff
View More Posts
Julieta is a freelance journalist and photographer. She studies anthropology at the National University of San Martín. She usually works with issues related to gender, migration and the environment. She collaborates with media such as New Society, The Cry of the South, LatFem, and The Rocket to the Moon (among others). Since 2020 she has been part of the 5th generation of young journalists of the RedLatam de Distintas Latitudes. Her greatest talent is the ability to relate everything to a Simpsons episode.

Effects of a fast-changing climate on Suriname’s indigenous communities

A look at the effects of climate change on indigenous communities in Suriname, where lack of outside communication is affecting awareness and capacity to address climate impacts. 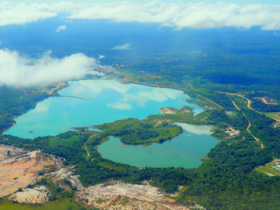