As the UN climate change conference in Glasgow, Scotland, came to a somewhat disappointing close on Nov.12, indigenous community rights activists gathered outside the offices of banking giants, JPMorgan Chase, in Glasgow, to demand big banking institutions stop financing oil and gas projects in sensitive ecosystems around the world.

The anti-fossil activism was significant for Uganda, where both local and international banks have faced the wrath of conservation groups which have been pushing against the funding of the East African Crude Oil Pipeline (EACOP), a 1,445km heated oil pipeline which both the French oil giants, TotalEnergies and Chinese firm, the China National Offshore Oil Corporation (CNOOC), are constructing from Uganda to Tanzania.

The pipeline is expected to cost upwards of US$ 3.5 billion of which US$ 2.5 billion will come from a project finance loan. Recent months have seen one potential financier after another distance themselves from the projects as global opposition to the project builds.

In April, this year, the #EACOP campaign run by dozens of local and international environmental NGOs welcomed news of three French banks, BNP Paribas, Société Générale and Crédite Agricole pulling out of a proposal to finance the construction of the 1,445km electrically heated EACOP that the companies want to link between the oil fields in northwestern Uganda and the Tanzanian port of Tanga.

Environmentalists say the EACOP will fuel climate change by transporting oil that will generate up to 34 million tonnes of carbon emissions each year, and together with the Tilenga and Kingfisher oil fields will negatively impact more than 120,000 individuals along the route.

The French banks joined Barclays, Credit Suisse and ANZ, all significant financiers of TotalEnergies, in deciding to steer clear of the project. The UK’s Export Credit Agency, UKEF, also ruled out for finance in March, this year, as it moved to implement a decision to stop financing fossil fuel projects overseas. In 2020, the African Development Bank also ruled out direct finance for the project saying it sees renewable energy as the future for the continent.

Protests by conservation groups against banking giants like JPMorgan Chase have been growing in recent years as they are seen as part of the climate change problem.

Conservationists and human rights campaigners say since the signing of the Paris Accords in 2015, the world’s largest 60 banks have doled out US$3.8 trillion globally for oil and gas projects. Climate activists say, of these financers, JPMorgan Chase is “the worst” with US$316bn in fossil fuel funding over the same period.

“The time to divest from fossil fuels is long overdue,” said Eriel Deranger, the executive director of Indigenous Climate Action, “This extractive economy is killing our communities and killing the planet. We cannot have false solutions that allow fossil fuel extraction to continue.

“We must say no to net-zero and demand that fossil fuels stay in the ground,” Deranger said in reference to the notion that it is possible for the world to create a balance between greenhouse gases pushed out into the atmosphere and those that are actually sucked out.

In October, this year, JPMorgan Chase joined the Net-Zero Banking alliance, a component of the Glasgow Financial Alliance for Net Zero (GFANZ). As part of its “net-zero” commitments, the bank pledged to cut back its operational carbon intensity by 35% by 2030, and to reduce end-use carbon intensity by 15%.

Yet, despite these commitments, representatives of the indigenous communities who are at the receiving end of some of these oil and gas investments say JPMorgan Chase’s investments include some of the most destructive and polluting types of extraction such as tar sands, Arctic oil and gas, Amazon oil and gas, fracking, and coal mining.

The bank, the campaigners said, tops the charts for investment in oil and gas companies in the Amazon in South America. It has financed billions in trade of Amazon crude oil, thus violating their own sustainability and risk management policies, by financing oil companies and supply from a project in a highly biodiverse area and where indigenous peoples are living.

The protests by the indigenous groups were one of several frustrations that environmentalists said global corporate firms had hijacked the climate change negotiations in Glasgow. The oil and gas giants headlined the pro-fossil lobby.

An analysis by Global Witness, a London-based anti-corruption non-profit noted how this year’s COP26 was flooded by oil and gas lobbyists with corporate influence. According to an analysis of the UN’s provisional list of attendees by Corporate Accountability, Corporate Europe Observatory (CEO), Glasgow Calls Out Polluters and Global Witness, the scale with which the lobbyists with a stake in the continued burning of fossil fuels have been enjoying access to these critical talks was unusually high.

Over 100 fossil fuel companies were represented at COP26 with 30 trade associations and membership organizations also present. Fossil fuel lobbyists dwarf the UNFCCC’s official indigenous constituency by around two to one.

The fossil fuel lobby at COP26 was larger than the combined total of eight delegations from the countries worst affected by climate change in the last two decades—Puerto Rico, Myanmar, Haiti, Philippines, Mozambique, Bahamas, Bangladesh and Pakistan. However, 27 official country delegations registered fossil fuel lobbyists, including Canada, Russia and Brazil.

“The case for meaningful global action must not be diverted by a festival of polluters and their mouthpieces, who have no interest in seeing the changes we need to protect people and the planet,” said Murray Worthy, a Gas Campaign Leader at Global Witness.

“The presence of hundreds of those being paid to push the toxic interests of polluting fossil fuel companies will only increase the scepticism of climate activists who see these talks as more evidence of global leaders’ dithering and delaying.”

“The scale of the challenge ahead means that there is no time for us to be diverted by greenwashing or meaningless corporate promises not matched by delivery. It’s time for politicians to show they are serious about ending the influence of big polluters over political decision-making and commit to a future where expert and activist voices are given centrestage.”

Worthy said COP26 has been sold as the place to raise ambition, but it’s crawling with fossil fuel lobbyists whose only ambition is to stay in business. The likes of Shell and BP are inside these talks despite openly admitting to upping their production of fossil gas.

Pascoe Sabido, a researcher and campaigner for Corporate Europe Observatory noted that if the world is serious about raising its climate change ambition, then fossil fuel lobbyists should be shut out of the talks and out of our national capitals.

“Instead, it is governments and communities from countries most affected by climate change that are finding themselves shut out, despite the UK claiming it has ensured an in-person and inclusive climate summit. Clearly that ambition only stretches as far as the fossil fuel industry. We need fossil free politics.”

Rachel Rose Jackson, the director of climate research and policy at Corporate Accountability said “the architects of the climate crisis cannot build a livable and just future when they have already burnt the house down.”

This story was originally published on The Independent, with the support of Climate Tracker.

Ronald Musoke
View More Posts
Ronald Musoke is a multiple award-winning Ugandan journalist with special interest in reporting on the environment, agriculture, business and human rights. He has been working at The Independent, Uganda’s premier political and business magazine, since 2012. Before this, he worked with The Sunrise, a Kampala-based weekly English newspaper (freelance); Green Chronicles, a local environmental magazine (Contributing Editor) and EnviroConserve AFRICA, a regional environmental magazine (Staff Writer). 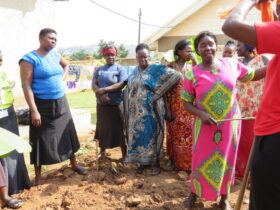