South Africa appears to have returned home from COP26 with the best deal among all the African countries that attended the Climate Conference in Glasgow.

On November 2, 2021 a deal was struck at the COP26 Climate Conference dubbed “Green Energy Partnership” where European Union Member States and the United States announced a partnership with South Africa to help to move the Middle-Income country away from Coal Power towards Green Energy sources.

At least 25 African Leaders who mounted the podium in Scotland demanded climate justice and far significant support from richer nations.  The Continent was well represented with more than 120 World Leaders.

Presidents and high ranking officials from Ghana and other nations on the Continent  delivered carefully crafted statements at COP26. As it appears, none of these nations was able to get deals as good as South Africa did.

Not even the surprise announcement indicating the commitment by China and the United States to work together ” to achieve the 1.5C temperature goal set out in the 2015 Paris Agreement could beat South Africa’s take home from the summit.

Although the details are still sketchy, what is clear beyond doubt is that South Africa stands to benefit from $8.5bn over the next three to five years in the partnership with rich countries such as Germany, UK, France, USA and the EU, a deal which is unprecedented.

The partnership with South Africa is also significant because unlike other deals involving African countries, the Green Energy Partnership has South Africa as its sole focus in Africa.

So why did South Africa get the nod from the United States and the EU?

Often considered one of the largest carbon emitters on the Continent, South Africa and its coal-powered energy source has long been questioned for its lack of sustainability. The country has the biggest source of carbon emissions in Africa, the Continent’s most industrialised economy has been targeted by activists for its large coal footprint, the source of about 80% of its grid energy. South Africa is among five African nations (Botswana, Malawi, Mozambique, South Africa and Zimbabwe) who have more than one new Coal Power Plant at the planning stage.

The country’s over-dependence on coal power is alarming. For example, “its electricity supplying power utility, Eskom, is not only the 12th-biggest carbon emitter in the world, it has faced significant issues keeping the lights on in South African homes, with several technical issues resulting in scheduled power cuts of up to four hours a day in recent weeks.

“In fact, power cuts were even announced on the very day that this green energy partnership was disclosed”.

Another important point to note is the fact that South Africa’s Coal Mining and processing efforts have contributed it to be the largest emitter of Sulphur Dioxide in the world, indicating the gravity of its negative impact on the Continent and global stage and the partners in the deal are not oblivious to this fact. With the above, it is easy to see why the US and EU  decided to partner South Africa in tackling climate change.

President of the United States Joe Biden summarised it better during a COP26 Press Conference announcing the partnership, (Key word here is partnership).

“By closing South African Coal Plants ahead of schedule and investing in clean power alternatives for the people of South Africa and supporting an equitable and inclusive transition in South Africa’s Coal Sector “we are following through on the pledge the G7 partners made in Cornwall [at this year’s G7 Summit] to accelerate the transition away from Coal in developing countries”. 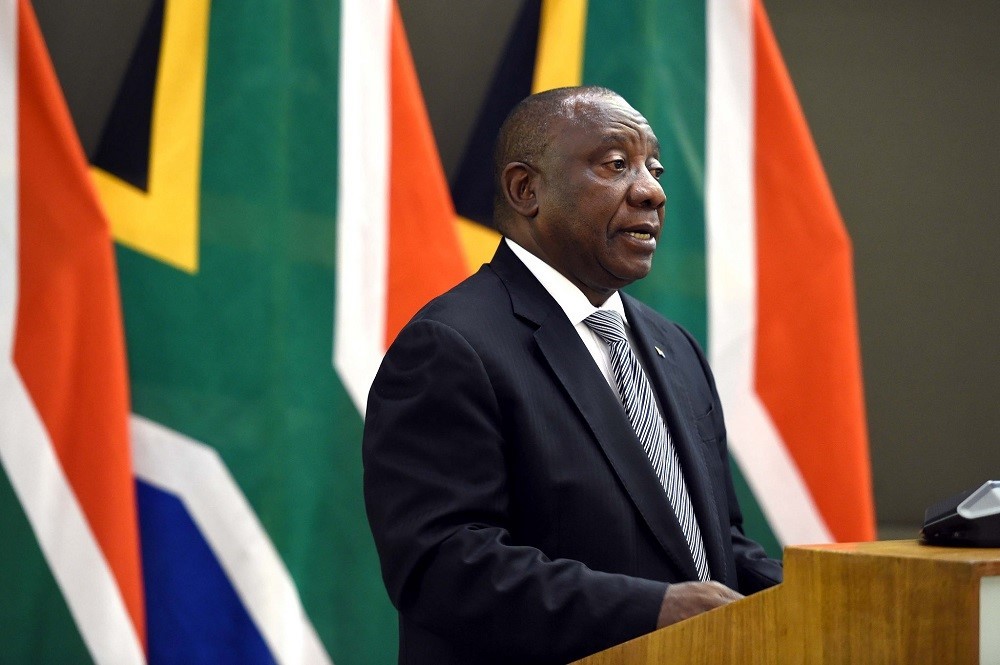 In a statement, South Africa’s President Cyril Ramaphosa described the partnership as a “watershed moment”, not only for his country but “for the world as a whole”.

South Africa’s $8.5bn partnership vs Other deals at COP26

If there is any lesson to be learnt from Climate Conferences, it would be that commitments and pledges do not bring with it any obligations. Case in point is the pledge by wealthy nations to provide $100bn to poor countries to help in tackling climate issues.

Partnerships on the other hand have better chances of realisation because  the whole process is not dependent on one party waiting for the other to fulfil a promise. It was no surprise as the UN Secretary-General Antonio Guteress acknowledged the Green Energy Partnership in his closing remarks of COP26.

“To help lower emissions in many other emerging economies, we need to build coalitions of support including developed countries, financial institutions, those with the technical know-how.  This is crucial to help each of those emerging countries speed the transition from coal and accelerate the greening of their economies. The partnership with South Africa announced a few days ago is a model for doing just that”, he stressed.

According to reports, about 17 major deals involving mainly financial pledges and commitments were reached at COP26, with African countries potentially benefiting from 15 of them in one way or the other. For instance, the Global Energy Alliance for People and Planet (GEAPP) on Nov. 2, 2021 pledged $10.5 billion toward helping emerging economies to adapt from fossil fuels to renewable energy.

African countries will potentially benefit from this kind of commitment however, no single African country is the focus of this deal hence the allocation of funds is likely to be erratic and uneven.

With the Green Energy Partnership, South Africa is the sole focus and would be the sole beneficiary from Africa to receive $8.5bn within the period. South Africa may even benefit from the pledge by the Global Energy Alliance for People and Planet  and others that target African countries.

Is the $8.5bn from the Green Energy Partnership enough?

South Africa may have returned home from Glasgow with the best deal among other African countries that attended the summit, however the reality is the money involved may not be enough to aid their complete transition, looking at the level of dependence of coal. A number of South African-based green groups have commented on the partnership, one of such groups is the “Life After Coal campaign”, which described the partnership as a “promising start”. In a statement the group said despite the climate financing boost, there is sure to be a funding gap.  South Africa’s Daily Maverick quotes the group as saying…..

“The deal is quite interesting. The amount which has been allocated to address the problem is far too small, “When you look at it, you have to consider that just in the electricity sector, one player holds about R400 billion (almost $26 billion) worth of debt that is sitting there… unusable assets as well that are hanging around”.

“The partnership, if it is seen as a catalyst for more mobilisation in finance, then it’s a good thing, but then if it’s not… it doesn’t really address the scale of the issue.”

There is no doubt that funding for climate action was at the centre stage of discussions at COP26. It became apparent even before the commencement of the Summit in Glasgow as the target of a $100bn pledge to aid poor countries in tackling climate change was not met. This was reiterated in almost all speeches and statements by Speakers at COP26, especially from African Leaders as they sought to paint a grim picture of the Continent’s plight in the face of Climate Change. 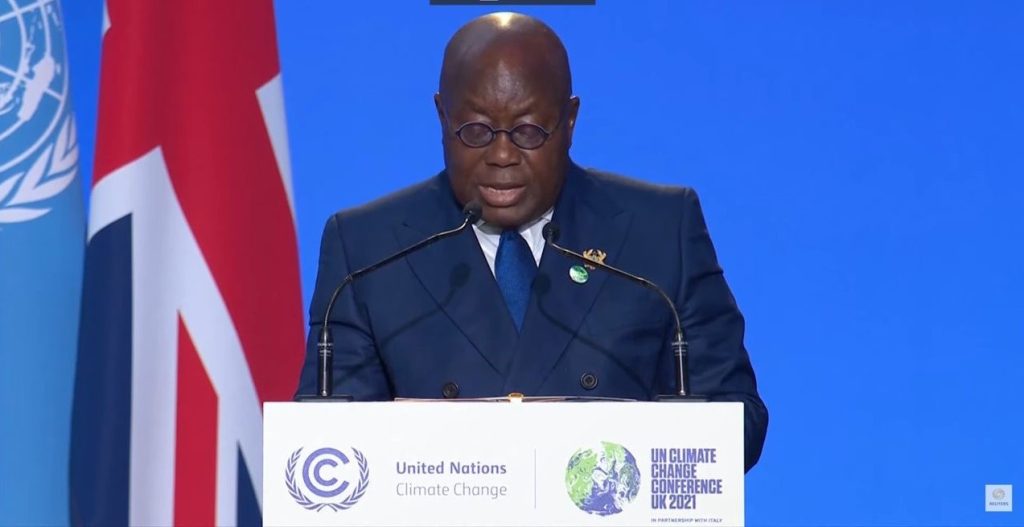 President of the Republic of Ghana Nana Addo Dankwa Akufo Addo said “We are naturally very disappointed by the failure of wealthy nations to honor their commitments; we must find a solution that recognizes the historical imbalances between the high emitters and low emitters”.

Zimbabwean President Emmerson Mnangagwa said “it is most unfortunate that the impact of climate change is disproportionately borne by the vulnerable communities which have contributed the least to the current stock of atmospheric carbon”.

The sentiments of these African leaders was echoed by UN Secretary-General Antonio Guterres in his closing remarks of COP26, where he urged the world’s wealthy nations to “make good on the $100 billion climate finance commitment to support developing countries”.

The reality of funding for climate change

Funding for Climate Change was an issue even before COP26 and this was evident in the failure of rich nations (who are mostly the main emitters of carbon) to honour their promise of $100bn to poor countries to tackle climate change. Climate Finance remains the major issue in the aftermath of COP26.

The UK government who were hosts of this year’s Climate conference put this in proper context, with a huge caricature Boris Johnson to mark the final hours of COP26 in a powerful visual action outside the Summit in Glasgow to frame the major sticking point of the COP26 negotiations: the broken promises on climate finance.

The illustration was done with a person dressed as the larger-than-life host of the global climate talks and British PM, surrounded by two huge piles of money -one labelled “Fossil Fuels” which was overflowing, and the other labelled “Climate Finance” which was almost empty.

The caricature Boris Johnson had in its hands a huge sign with a tweaked version of his catchy slogan: “Coal, Cars, Cash and Sleaze.”

The intention was to draw attention to the injustice at the heart of the COP26 negotiations. As reiterated earlier,12 years ago, the UK and other rich nations committed to deliver $100bn in climate finance to vulnerable nations. Today, the goal still hasn’t been achieved. This is despite governments’ spending $5.9 trillion sub sidising the Fossil Fuel Industry in 2020.

This story was originally published on GBC Ghana Online, with the support of Climate Tracker.

Nathaniel Nartey
View More Posts
Nathaniel currently holds a Bachelor of Arts in Journalism (BA) and Master of Arts in Development Communication(MA) from the Ghana Institute of Journalism. He considers himself witty and funny and likes using these characteristics in his storytelling to make technical issues easier to understand. He’s been a journalist for more than six years with the Ghana Broadcasting Corporation, GBC.