Since the 1960s, extractive industries such as oil and mining have threatened the Ecuadorian Amazon to satisfy an extractive economic model. The result has been devastating.

There have been oil spills such as the emblematic Chevron-Texaco case, millions of hectares of tropical forest have been deforested, and hundreds of indigenous communities have been displaced.

In May 2021, Guillermo Lasso assumed the Presidency of Ecuador and promised that his government would be responsible for the environment.

Upon coming to power, he established the Ministry of the Environment, Water and Ecological Transition for Ecuador to achieve a sustainable model. However, the economic policies adopted so far are far from sustainable.

One of them is Decree 95, which establishes a doubling of oil production. Each year Ecuador produces 194 million barrels of oil.

A recent study on oil extraction in the country estimates that, in a decade, oil will no longer be the primary source of income in the country and urges to change the economic model. But the signing of Decree 95 is contrary to what the experts think.

In addition, if Decree 95 remains in place, Amazon will be lost. Jessika García from COICA says that right now, 17% of the Amazon is deforested and degraded. If it reaches 20%, it will be a point of no return, and the consequences will be devastating for the world.

In an interview, the Minister of Environment, Water and Ecological Transition, Gustavo Manrique, said that the Ecuadorian contribution to the global inventory of CO2 emissions represents only 0.15%. But if the Amazon is lost, Ecuador’s contribution to climate change will be much more outstanding.

To this must be added the CO2 emissions caused by the burning of natural gas in the 447 oil burners and the air, soil, and water pollution caused by extractivism. Lasso’s government has been in office for just four months.

The United Nations Climate Change Conference is an opportunity for the Ecuadorian government to change extractivism and help save the Amazon and the planet.

This article was published with the support of Friedrich Ebert Stiftung.

Doménica Montaño
View More Posts
Doménica is a journalist from Ecuador who loves to write stories about the environment, climate change, indigenous communities, and human rights. Her favorite story is one she wrote over a year ago about nine girls who sued the Ecuadorian state for violating their rights with the gas flaring systems that are still being used by oil companies in the Amazon. She’s very proud to say that that story was awarded an honorable mention in a human rights journalism competition. 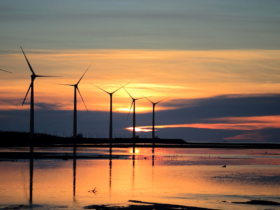