I am nineteen years old. I love music, literature, and all things beautiful. That is, I like the slime-coated cobblestones in my medieval Italian town; the scent of pine in my forest in New Hampshire — the cracked silhouette of a dead tree rotting over the river; I love my sister when she plays the wrong note on her cello, flinches, strains her ears, and tries again.

I grew up in Italy, I lived in France, I studied in New England and Virginia, my sisters are half-Japanese. All these lands belong to me, and I to them – they have seen me grow and change, I have seen the different palettes of their foliage, their trees grow, friends come and go and come again.

I am nineteen years old, and climate change is the conflict of my generation. On July 24, The Guardian published an article that explains how the scientific community is reaching a consensus on the anthropogenic nature of the changes in climate we are beginning to see, and the much more severe ones that are forecasted. While periodic fluctuations in temperature are a well-known phenomenon in climate history, in the last 2,000 years there is no evidence of increases in temperature as rampant as what we have been witnessing in recent decades.

If we look at proxy records of climate change during The Little Ice Age that occurred in the Middle Ages, it becomes apparent that these changes only occurred in as much as half the earth at a time. On the other hand, anthropogenic greenhouse emissions are having a truly global effect – melting glaciers, islands swallowed by the rising seas, tornados in Florida and desertification in the Savannah.

There is no escape from our own suffering.  After all, what is this if not our own suffering? Is it not us who stare blankly at a TV screen flashing pictures of ideal people and their glinting smiles, ice cream pint in hand, comforting ourselves for some sort of detachment – the body we didn’t take care of, the partner we stopped looking in the eyes, an existence within the anonymity of a crowd; everyone scraping at some sort of survival. This is the blindness of hurt.

Climate change is an egological epidemic. Otto Sharmer, professor at MIT, talks about this shift in paradigm we have to make: from egosystems to ecosystems. Of course, to look only after oneself is a fear-based existence. But when we feel no connection, no sense that we are sharing this life and planet with those we love, when we don’t see that we need clean air, an atmosphere, a sun, heat and cold and dry and rain – that beauty is also death, the silhouette and the slime – why would we look after that which we feel separate from?

In cracked glaciers and desert-sands are symptoms of the breaches in our families and societies. When we don’t have a sense of self, we try to control environmental factors to “frame” us. In other words, we become a compendium of external “ways of being” – whether by taking a quiz that tells us what Disney character we are, by affiliating ourselves with a political party or by joining an alumni network.

It is, of course, useful to denote ourselves with a name, a nationality, a particular craft or interest. However, when our tags overwhelm our changeability (a fleeting smile, a rogue tuft of hair and a glimmer of the eye) our identifications become a “this, not that;” us, not them.  A superficial identity leads to separation, and separation to selfishness, and selfishness further segregates identity.

From an environmental perspective, a lack of coming together means being disconnected from what we need as a collective organism. As reported by Forbes, July 29, 2019 marked the yearly “Earth Overshoot Day.” We exhausted the yearly available resources, which means that, on average, we are consuming 1.75 times our share.

This is not merely a matter of altruism. Clean water, an intact atmosphere, nutritious food and a relatively stable climate are in everyone’s interest. While the wealthy might be able to avoid, to patch up, to bypass or even temporarily reap the benefits of limited water access, the warming of Siberia or a climate refugee trade of arms, this is no world to leave to our children. Let alone their children. Donald Trump’s grandchildren will suffer just as much as we do if we aren’t able to harness our emissions, and listen to global demands.

In the history of the cosmos, humanity is a dramatic accident. Galaxies would hardly mourn for a puff of smoke (a nuclear bomb) rising from a distant planet Earth – I can just imagine them getting the news with a 100 light-year lag and shaking their heads in sorry surprise; like when Romeo kills himself right before Juliette wakes up, and she follows suit, leaving the audience knowingly cringing … Well, there went a perfectly good happy ending.

No matter what, humanity will either go extinct or evolve into some sort of community of intergalactic wanderers (citing WALL-E and Mr. Musk), though I don’t know which outcome is better. The Earth, and the whole Solar System, will blow up. We are living in a cornucopia of beautiful evolutionary accidents, and somehow we’ve become responsible for safeguarding all our contemporary populations and fellow species.

But unlike Romeo, we might still have the ability to see:  1) Juliette is there, in deep slumber but still alive. 2) Instead of knocking ourselves out with poison (and we all have our poisons, the more and the less deadly), is there a chance we can wait for Friar Laurence to…  3) Understand what’s actually happening and act accordingly so that we can all 4) Live happily ever after? Well no, I don’t believe in happily ever after. As long as there’s life there’ll be pain and confusion.

But is that enough to forget the birds and the bees, the rats and the swans, the flowers and the fallen trees, the squeaks and music of your sibling, your grandmother’s food? If you love it, we’ll love it. We are all in it for us, and for more than us. 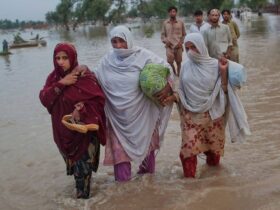