Climate change is an “existential threat” to the region

Small Island Developing States (SIDS) of the Caribbean headed to the 2021 United Nations Climate Change Conference (COP26) with a shared objective—to rally support for ensuring that increases in average global temperatures are limited to 1.5º Celsius above pre-industrial levels, as recommended in the Paris Agreement.

“To do less, is to put at risk our generation and the future,” stated Keith Rowley, the prime minister of one such country, Trinidad and Tobago in March this year. His remark highlights the gravity of the climate crisis for Caribbean SIDS. Warmer ocean temperatures and higher sea levels are already contributing to more frequent and destructive hurricane seasons in the region. Research has linked Hurricane Maria—a deadly Category 5 behemoth that ravaged Dominica, Saint Croix and Puerto Rico in 2018—directly to climate change.

In Trinidad and Tobago, the Intended Nationally Determined Contributions (INDCs) to combating climate change under the United Nations Framework Convention on Climate Change (UNFCCC), acknowledge that the country’s annual mean air temperature has warmed by almost 1º C over the past half-century, and that continuing along this trajectory would leave it more vulnerable to increased flooding. This year, Trinidad and Tobago has seen unprecedented amounts of flooding that has led to the destruction of roadways and property in communities from St. Anns in the north to Penal, towards the south.

Adding urgency to the crisis, the latest assessment report by the Intergovernmental Panel on Climate Change (IPCC) points to the likelihood of more loss and damage in the near future. The report makes it clear that limiting global warming to 1.5 C would be impossible without “immediate rapid and large-scale reductions in greenhouse gas emissions.” But Colin Young, Executive Director of the Caribbean Community Climate Change Centre (CCCCC), who spoke with Global Voices via Zoom, says that the report would be the “biggest plus” that the region has at COP26: “We have been doing our part in terms of mitigation but we need the largest emitters in the world to do more.”

For context, the Caribbean is responsible for less than one per cent of global greenhouse gas emissions, while the G20 nations are responsible for around 80 per cent. Young referred to this as the first major priority for the region: “COP must result in global ambition that will keep the 1.5 temperature goal within reach. So that’s outcome number one right now.”

Activists in the region have rallied around this message through a campaign website called “1.5 to stay alive”—its homepage greets you with various portraits of young Caribbean girls standing submerged by rising sea levels: their hands are mostly held above the water gesturing the numbers one and five. The creators, Panos Caribbean, refer to climate change as an “existential threat” and, with COP26 getting underway, have used the campaign to fervently make the case as to why this is so. The reality, however, is that the Caribbean needs to also plan for some amount of inevitable change, which is why Young listed the region’s second major priority at COP26 as securing climate finance for adaptation.

According to the UNFCCC, climate adaptation refers to adjustments in ecological, social, or economic systems in response to effects of climate change. In the Caribbean, this can take many different forms and would be specific to the unique needs of each island. For example, islands like Dominica, sitting in the hurricane belt, would need to fortify their infrastructure, whereas Trinidad and Tobago would have to consider how to protect reclaimed land from flooding and coastal erosion.

At the Copenhagen COP in 2009, richer nations promised to commit 100 billion United States dollars a year in climate finance. According to the Organisation for Economic Co-operation and Development (OECD), however, that promise has gone unfulfilled. Their September estimates showed that climate finance in 2019 fell short of this target by US $20 billion.

Young said there is no excuse because “even before COVID, the pace at which the finance was being delivered would have been suboptimal.” He said the time had come for developed countries to live up to their commitments and that COP26 is where they should be held to task. The third area that Young pointed out for the region is the finalisation of the Paris rulebook, which is necessary for the full implementation of the Paris Agreement. The outstanding chapter of the Paris rulebook deals with questions of transparency—how do countries report on their progress?

In a telephone interview with Global Voices, Trinidad and Tobago-based environmental consultant, Ryan Assiu, explained, “Even though parties are pledging to become carbon neutral or saying they’re going to implement certain measures, if you don’t have a proper system to transparently account for them, you can’t really tell whether you’re making it to carbon neutrality by 2050.”

COP26 negotiations began on October 31 in Glasgow, Scotland, and are scheduled to last until November 12.

This story was originally published on Global Voices, with the support of Climate Tracker. 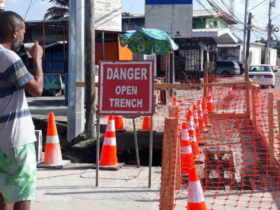 Road infrastructure needs to be in line with changing climate