Countries of the Caribbean region are amongst the world’s most vulnerable to the worst impacts of climate change, from warmer temperatures and rising sea levels, to increased hurricane intensity and unpredictable, also extreme weather events.

Caribbean journalists play a crucial role in tracking energy transition developments across the region, keeping the public informed, and holding decision-makers to account. However there are still critical gaps in media coverage and public awareness, despite the urgency of the Caribbean’s need to embrace an energy transition.

That’s why we were excited to kick off our Caribbean-focused drive with our Caribbean Energy Transition Journalism Fellowship for 30 journalists from Jamaica, Guyana, and Trinidad and Tobago.

From our bigger group, we awarded 9 workshop participants with a special energy transition publishing grant. Get know know these awesome journalists and read their insightful stories.

“Trinidad and Tobago’s economy is driven predominantly by the oil and gas industry. The sector employs over 10,000 people in oil and gas and petrochemicals. As T&T commits to transitioning towards a greener economy, how will these carbon-intensive jobs transition to greener ones? I explored this in my story.”

Ryan’s story was published in the Trinidad and Tobago Guardian:

“This article seeks to highlight the nuances of Guyana’s efforts at establishing a new gas-to-energy project. It touches on the seemingly conflicting low carbon, oil and gas development pursuits but also the need for prosperity and development. It appears as though this development cannot be viewed as a ‘black and white’ issue.“

“Most journalists and writers focus on the geopolitical side of energy transition where they focus on issues that are relevant to the layman but isn’t understood by said layperson. I wanted to speak to the people and this was a good way to do that.

This article highlights a fairly young and ambitious Jamaican company working towards helping others understand energy transition while assisting them to switch to renewable energy and conservation. It’s an article that can be appreciated and understood by most.“

Candice’s story was published by Petchary:

“This is the story about Trinidad and Tobago’s plan to reduce its carbon emissions. T&T has been in the oil and gas sector for approximately 100 years. Its economy is centered around the energy industry.

As the leader in energy in the region and a Small Island Developing State, I wanted to find out what plans the country has to develop a low-carbon energy sector.“

Rachael’s 2-part story was published in the Trinidad and Tobago Newsday:

“With Guyana’s accelerated growth trajectory, tens of thousands of conventional vehicles are registered every year – each of these carrying its own carbon footprint. Therefore, it is without question that if Guyana means to fulfill its promise to the world, the automotive transition to electric vehicles is critical

My article explores the measures being taken by the government to create a national framework for the automotive transition, and how it plans to accelerate this. Time is of the essence.“

“My story breaks down the complex stuff, so you don’t have to. It outlines in ‘super-simplified’ terms the Energy policy of Jamaica and the goals we have in place to achieve cleaner and renewable energy.“

Tamoy’s story was published by Our Today:

“Over the past 20 years, the Southern Caribbean Cable Company has conducted feasibility studies on a proposed underwater cable to interconnect renewable energy around the region and create an open market.

Tyrell’s story was published by The Antigua Observer:

“Guyana has long had a commitment to becoming a green country. Since before the discovery of oil and gas there were efforts to make our contributions towards a greener world. When the country went into oil production our commitments were not waved, we continued to pursue the green energy agenda.

It is against this backdrop that I am inspired to highlight the achievements made to date in our energy transition through the use of solar.”

“My energy transition story focuses on how Jamaica is moving away from non-renewable sources for energy, such as heavy oil and petroleum products, and its progress with switching to more natural resources, especially when it comes to electricity provision.

It also provides recommendations on what persons can do to be more energy efficient, to further reduce our carbon footprint.”

We also thank our awesome trainers who have provided guidance and insights to our fellows publishing their stories!

This Energy Transition Workshop is one among many things happening in the Caribbean! If you want to know more about Climate Tracker’s work in this exciting region, follow our hashtag #climatetrackercaribbean on Twitter, Instagram, LinkedIn, and TikTok. 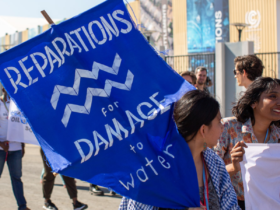