Before selling their product, small coffee growers from Guatemala work for five months, and fight against natural disasters, disease outbreaks and labor exploitation. By the time their coffee reaches European countries, it sells at almost 5 times its original price.

In 2021, rural communities from Northern Guatemala sold their coffee to local buyers at $24.30 per quintal. Then, intermediary companies sold the Guatemalan coffee to Europe for about $122.5 per quintal.

Coffee is one of the most valuable commodities exported by developing countries, but most of its benefits go to rich nations such as Italy, experts said.

In Guatemala it is the third most exported product with 4.1 million quintals a year. In spite of the increasing threats of climate change, the poorest communities subsist from this crop without government aid.

“Coffee is a colonial crop. Local populations, or slaves, were forced to grow a crop at dirt cheap prices that could then be traded by colonial powers,” says Sara Morocchi, founder of the coffee consulting company Vuna.

After the colonial era, the coffee-drinking Western countries set up a system where coffee could be traded. Coffee became a commodity, a cash or export crop, which according to Morocchi is just “another way to say it’s a colonial crop”.

There, coffee is sold for a price that doesn’t reflect the effort of producing it, tying small growers and families to a system they barely have a say in, she said.

In spite of its colonial past, coffee doesn’t have the biggest impact on the environment. “If we just look at the environmental perspective, I don’t find coffee per say to be as bad as for instance palm oil,” says Morocchi.

Coffee has been linked to illegal deforestation for instance, but it does not happen in the same measure as with other crops and commodities, such as soy, palm oil, cocoa, and cattle products.

But looking at social sustainability tells a different story. Due to market imbalances, many small holders are not able to live off what they make with coffee, often selling it below the cost of production.

Nowadays, there are still producers in Guatemala who work 5 days a week to make a profit of $9, according to the organization Verdad y Vida, which works with women coffee growers in Northern Guatemala.

Coffee and climate change share a nuanced relationship. The production of coffee is indeed a potential source of different types of environmental pollution, but the crop is also key to biodiversity and is very vulnerable to the impacts of global warming.

Part of the coffee footprint depends on the use of fertilizers and fungicide, which is linked to the size of the farming plot. Small and medium farms are usually less chemical intensive, because they can’t afford to pay for them, as Morocchi suggests.

Exploitative coffee production is also linked to deforestation, especially as regards the coffee plants grown in the sun. This type of coffee was designed to maximise the production of beans and every cup appears to be associated with the loss of one square inch of rainforest.

However, exports through massive cargo ships moving the product from one side of the ocean to another represent the most polluting aspect of coffee production.

Despite its impacts, coffee also has benefits to the natural landscape. This crop prevents the slopes from eroding, represents a great carbon sink and is good for biodiversity, explains Gail Hochachka, Doctoral Research Fellow at Oslo University.

“Shade-grown coffee plantations are home to species of birds and insects and make up important migratory corridors to Mesoamerica,” said Hochachka.

Guatemala is one of the countries most affected by climate change. In early 2019, a drought affected 42.000 hectares of crops. Then, later in the same year, two tropical storms flooded entire communities, destroying 136,761 hectares of different crops.

According to Hochachka, as the weather gets more humid and hotter, coffee production is feeling the impacts. For example, the crop is becoming prone to fungi and diseases, such as the Roya.

In spite of their increased vulnerability to climate change, coffee producers in Guatemala are growing their crops and applying their own mitigation measures against climate change almost without aid from the government.

Mario Enrique Chocooj, representative of the Guatemalan National Coffee Association (Anacafé), for example, is promoting the use of synthetic and organic fertilizers to strengthen the soil. Anacafé has a guide on climate change mitigation for coffee farms in local communities.

One of them is María Magdalena Pop, a small producer from San Lucas Chiacal. “The weather is unpredictable. That is why, as farmers, we find it necessary to use chemicals to end pests and to strengthen the land in which we cultivate”, she said.

Central American coffees are regarded as quite special and unique, because of their refined flavour profiles and high quality. However, they hide social problems in their chain of supply, with little opposition from consumer nations.

“Coffees from Guatemala are considered high and delicate coffees with round bodies”, Morocchi explains. “It’s a supply chain that is less commercial than the Brazilian or the Vietnamese ones”.

Although some virtuous examples of coffee production exist in Guatemala, this sector has been surrounded by labor exploitation and child labor.

In 2020 the name of the country resonated in Europe, as children were found picking coffee beans on Starbucks and Nespresso farms.

This shed light on working conditions in large coffee farms, where according to a 2016 survey of the Food and Agricultural Organization (FAO) 44% of the coffee bean pickers were underage.

On the other end of the supply chain, Italy is famous for its coffee consumption, with 78% of Italians drinking at least one cup per day. Italy is the second-largest importer of green coffee beans in Europe and Europe’s second-largest roasted coffee exporter.

Despite that, the Italian coffee market is not in the vanguard in environmental terms. “There’s no real interest in sustainability, but there is an interest in selling a product appealing to a growingly eco-conscious consumer” explains Polojac.

The rising specialty coffee segment is trying to address the issue by paying higher prices and making sure the farmers receive a living income from their coffee, as suggested by Morocchi.

“Valuing the local growers enhances sustainability at every stage of the supply chain” says Alberto Polojac, coordinator of Specialty Coffee Association Italy. “Local coffee growers are pivotal. Without them, there wouldn’t be any coffee at all”.

According to Morocchi, in the commercial segment, which is the biggest segment right now, “none of this is addressed.”

Despite the absence of official data, the specialty coffee segment is estimated to account for around 1% of the global coffee market, as suggested by Specialty Coffee Association Italy. On top of being a niche sector, the specialty consumption has been decreasing over the past few years, at least with regards to the US market for which data is available.

The tension then lies on bigger commercial companies like Lavazza, Illy, Nespresso, among others, experts said.

Due to their market size and their economic power compared to the specialty segment, the only way to produce a large-scale difference in the coffee industry is for the commercial segment to adopt sustainable and fair practices, following the example of the speciality segment.

“Lavazza is embarking on an interesting journey. The Lavazza Foundation is very active at origin and in the last few years, they’ve started to consider working on more sustainable transparent sourcing” continues Morocchi.

Some local initiatives have aimed to change the reality of coffee producers in Guatemala. Matilde Xoy Mo, an indigenous woman of the Pocomchí ethnic group, is impulsing one of them, called “Rebirth through coffee”.

Xoy Mo lives in Najtilabaj, a community settled in the high mountains of the Alta Verapaz, 200 kilometers from Guatemala City. There, houses are made of adobe and wood and there is no electrical power.

In 1982, Matilde’s community was massacred during the 36-years-long civil war that left 250,000 people dead. In order to survive, Matilde and her family escaped and hid in the mountains. When she returned to her town, she found that everything had been wiped out, her crops included.

Thirty years later, Matilde is part of the Las Flores Women’s Group, an organization of 40 war survivors that seeks to improve the living conditions of the community through small-scale coffee production.

The project, funded with $56,000 by Lavazza, operates in Guatemala through the non-governmental organization Verdad y Vida and provides workshops and training on the cultivation and production of coffee to about 180 women like Matilde.

Each of the women has a small crop and sells their coffee in cherry or processes it to have a larger profit. In addition to the training sessions, Verdad y Vida has provided the women with machines to pulp and dry the coffee. This allows them to sell the product at a price three times higher.

“What Lavazza seems to be doing is niche innovation, but it is all about scaling out. How does that transform into sustainable change?” asks Hochachka.

According to the researcher, for climate change adaptations to work, it is necessary to extend the projects to more families and regions, as well as pushing for systemic changes, where retailers and roasters can play a difference.

The last piece of puzzle is enhancing subjective and emotional connection and awareness in consumers about how their coffee is produced.

Meanwhile, without any aid from the government, Guatemalan women are building resilience to climate change, growing and selling their coffee to local buyers, and they plan to expand their production to be able to export it. 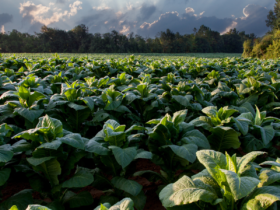 COP27: What it means for the future of agriculture in Jamaica

Climate change impacts on agriculture and food availability in Jamaica.