In recent years, Argentina's environmental problems have become much more radical. At the same time, the serious indebtedness contracted during the presidency of Mauricio Macri is one of the great conditions when it comes to tackling the energy transition.

From October 31 to November 12, COP26 – United Nations Conference on Climate Change- will be held in Glasgow. The event will feature the participation of delegations from almost 200 countries that will meet in Scotland with the aim of taking actions capable of curbing the climate emergency. The first week will be meetings of leaders from around the world, while the second will be focused on the negotiations of the commitments established at the individual and global level. It is expected that one of the topics with the greatest presence at COP26 will be the implementation of the energy transition at the global level.

While in the Caribbean, extreme hydro-meteorological events have become commonplace, in the rest of the continent, natural disasters such as forest fires, droughts and the loss of glaciers are increasingly frequent. In December 2020, Venezuela became the first country in the world to lose its tropical glaciers due to the increase in temperature in the Andes Mountains. A few months earlier, the image of a jaguar with her calf in the middle of the burned vegetation of the Encontro Das Águas State Park had reached the pages of several international media. In total, it is estimated that in 2020 alone, the Amazon lost 2.3 million hectares as a result of forest fires.

The Paris Climate Agreement, signed in April 2016, seeks to limit global warming and ensure that the rise in temperatures does not exceed 2 ° C. Given this scenario, the only way to meet the proposed objective is through an energy transition that involves the elimination of fossil fuels (oil, natural gas and coal). In line with this approach, greenhouse gas emissions have to reach their peak as soon as possible, and then fall to zero before 2050. For various reasons, Latin America seems to be a long way from reaching the proposed goals.

The term “ecological debt” was used for the first time by the Spanish lawyer José María Borrero. This concept refers to the unequal level of consumption of natural resources, greenhouse gas emissions and waste generation between the countries of the Global North and those of the South. Globally, Latin America is responsible for only 5% of CO2 emissions. Even so, the latest report prepared by the World Meteorological Organization (WMO) makes it clear that it is the region most affected by climate change.

On September 10 of this year, Argentina was one of the countries that led the High-Level Dialogue on Climate Action in the Americas. In his speech, Alberto Fernández highlighted the need for credit agencies to commit 50% of their loan portfolios to environmental actions. Indebtedness is a common factor that unites all the countries of the region, and at the same time, it is one of the greatest limitations when it comes to addressing the energy transition.

From various European institutions, the rest of the countries are often pressured to adopt measures aimed at promoting ecological recovery. In March of this year, the European Union announced that in the future, it plans to apply tariffs to those countries that do not comply with certain environmental requirements. However, for Latin America, it is very difficult to meet the objectives, in a context marked by external debts. Furthermore, in 2020, the region’s GDP fell 7.7%. According to the data of a report prepared by the United Nations, S $ 318,000 million was allocated to fiscal and stimulus measures aimed at remedying the effects of the pandemic. Of the total, only 2.2% respond to an ecological perspective.

Ignacio Sabatella is a Doctor of Social Sciences (UBA) and a researcher at CONICET. He specializes in oil policy and regional integration. Asked about the specific situation of Argentina in the face of the energy transition process, he explained: “The country is in very difficult social and macroeconomic conditions. There are extremely high levels of poverty, and an external debt that is very difficult to manage. This creates many difficulties, since the transition requires large investments from here to the next decades. ” Later, he added: “a large part of the population not only has little access to basic services, but energy is also a problem. It is true that service rates are frozen, but the starting point is a strong dependence on hydrocarbons, and, in particular, on natural gas. The percentage of renewable energy in the energy matrix is ​​still very low compared to other countries in the world ”.

Argentina’s situation regarding the environment is dramatic. Suffice it to say that, in 2020 alone, 0.29% of the country’s total surface was burned. Most of the fires were set intentionally, or occurred in the context of droughts. The country is responsible for 0.7% of CO2 emissions worldwide. Although it seems little in relation to countries like the US, it is also true that it is ranked 23rd in the ranking of issuers.
In the discursive, Argentina seems to be focused on leaving behind the use of hydrocarbons.

However, according to a report by the International Energy Agency, the country’s government continues to develop new oil and gas projects for the coming decades, destined for domestic use and for export. From this perspective, the problem is not only external. Presence at COP26, and adherence to possible agreements is an important factor, even so, that does not guarantee the required paradigm shift in environmental matters.

Nicole Becker is 20 years old and is one of the founders of the group Jóvenes por el Clima. For her, Argentina tends to have a positive role in the face of the United Nations Conference on Climate Change: “It is not a country that opposes the agreements. Another advantage of COP26 is that it contributes to the dissemination of the media, and allows the environmental issue to be on everyone’s lips ”. Later, she added: “The country’s problem is that signing a pact is not synonymous with its being fulfilled. For this very reason, environmental activists have to be more awake than ever ”.

This story was originally published on Sudestada, with the support of Climate Tracker.

Julieta Bugacoff
View More Posts
Julieta is a freelance journalist and photographer. She studies anthropology at the National University of San Martín. She usually works with issues related to gender, migration and the environment. She collaborates with media such as New Society, The Cry of the South, LatFem, and The Rocket to the Moon (among others). Since 2020 she has been part of the 5th generation of young journalists of the RedLatam de Distintas Latitudes. Her greatest talent is the ability to relate everything to a Simpsons episode. 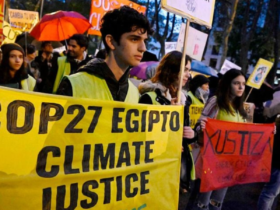 Should Brazil give more priority to “green energy” than forest 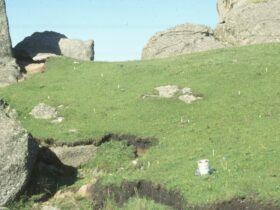 More than just planting trees: volunteers are restoring this degraded ecosystem in Argentina

Reforestation is one of the ways to fight against desertification. This phenomenon implicates the permanent degradation of ecosystems caused by human activities and climate change.