COP26 will need to produce a plan to make sure the $100 billion arrives. It will also start negotiations on a new climate finance goal for 2025 – and the rules to make sure rich countries cannot avoid delivering the money.

Yesterday, October 31, marked the beginning of the event of the year – COP26; it will be for the next 12 days. One of the most important decisions that will dominate the conference, being held in Scotland, is the popular talk about developed countries mobilising $100 billion to support developing countries. Analysts say the conference must rebuild confidence that global, collective action can solve humanity’s greatest challenges.

In her opening speech Sunday, Patricia Espinosa, Executive Secretary of UN Climate Change, said the devastating loss of lives and livelihoods this year due to extreme weather events clarifies how important it is to convene COP26 despite the impacts of the pandemic still being felt.

Also, while addressing the conference following his election, COP President Alok Sharma thanked delegates for travelling to Glasgow and outlining the urgent need for action:

“As COP President I am committed to promoting transparency and inclusivity. And I will lead this conference in accordance with the draft rules of procedure, and with the utmost respect for the party-driven nature of our process. In that spirit, I believe we can resolve the outstanding issues. We can move the negotiations forward. We can launch a decade of ever-increasing ambition and action. Together, we can seize the enormous opportunities for green growth, for good green jobs, for cheaper, cleaner power. But we must hit the ground running to develop the solutions we need. And that work starts today. We will succeed, or fail, as one.”

What is $100 billion and why does it matter?

In 2009, at the Conference of the Parties (COP) of the United Nations Framework Convention on Climate Change (UNFCCC) in Copenhagen (COP15), developed country Parties committed, in the context of meaningful mitigation actions and transparency on implementation, to a goal of mobilising, jointly, $100 billion a year by 2020 to address the needs of developing countries. In this regard, Parties specified that the finance would come from a wide variety of sources, public and private, bilateral and multilateral, including alternative sources of finance. The climate finance goal was then formally recognized by the UNFCCC Conference of the Parties at COP16 in Cancun. At COP21 in Paris, Parties extended the $100 billion goals through 2025.

This long-standing commitment is key to trust and solidarity between developed and developing countries, rooted in the fact that developed nations are responsible for the majority of carbon emissions since industrialization began, and generally have a greater capacity to offer support.

The OECD recently estimated that developed countries mobilised $79.6 billion in climate finance in 2019. It is likely that these nations failed to collectively meet the $100 billion goal in 2020.

Last week, wealthy countries confirmed they failed to meet a 2009 promise to deliver $100 billion annually by 2020 in climate finance to help poorer nations cut their own emissions and build resilient systems to weather worsening storms, floods and other climate impacts and this has caused anger and mistrust among developing countries and undermined rich nations’ requests that the developing world cut emissions faster – which would require huge investments to decarbonise everything from power plants to factories, transport and farming.

COP26 will need to produce a plan to make sure the $100 billion arrives. It will also start negotiations on a new climate finance goal for 2025 – and the rules to make sure rich countries cannot avoid delivering the money.

As part of the Paris Agreement, countries agreed to try to limit global warming to 2C – but ideally 1.5C – to curb climate breakdown, and to submit their own action plans as to how they will each achieve this.

COP26 is more about ensuring that developing countries, in particular, are supported as they have been at the receiving end of the worst calamities that come with climate change. Across Africa, many countries are battling sea-level rise which is threatening their coastal regions, a key source of revenue. In West Africa, coastal areas host about one-third of the region’s population and generate 56 per cent of its GDP but this region loses about $3.8 billion yearly due to coastal zone degradation.

Several other countries are plagued by variable rainfall patterns that affect crop yield and agricultural productivity, also fuelling drought and the consequent conflict that arise as a result of resource clashes. Southern Africa witnessed extensive drought in 2019 while the Greater Horn of Africa and the Sahel, dry regions, experienced flooding in 2019 as a result of heavy rainfall.

Almost all sectors are vulnerable to climate change. Extreme heat has dire impacts on health and morbidity while rising flooding increases the risk of waterborne disease. Climate shocks often affect the economy too as well as the livelihood of the people at the grassroots who mostly suffer from these challenges.

Climate change also widens the existing inequality gap between the rich and the poor and men and women. As noted in a UNFCCC report, “Women constitute a large percentage of the world’s poor, and about half of the women in the world are active in agriculture – in developing countries, this figure is 60 per cent, and in low-income, food-deficit countries, 70 per cent.” If not properly addressed, climate change may exacerbate the already existent crises of poverty and inequality across the continent.

Developed countries must honour their promise

Developed countries must deliver on their promise to mobilise $100 billion every year in climate finance to support developing countries. This must include building new markets for adaptation and mitigation and improving the quantity, quality, and access to finance to support communities around the world to take action on the changing climate.

The OECD estimates that $79.6 billion of climate finance was mobilized in 2019. The UK said it will be doubling its International Climate Finance commitment to help developing nations with £11.6 billion over the next five years up to 2025/2026. Joe Biden, president of the United States, announced an increased U.S. contribution to climate action in developing countries at the UN general assembly on Tuesday.

During a speech at the UN General Assembly on Tuesday, Mr Biden said his administration would work with Congress to double its April pledge of $5.7 billion to $11.4 billion a year by 2024 and “make the U.S. a leader in international climate finance.”

COP26 should ensure that as many countries as possible follow this and increase their commitments through to 2025.

Ahead of COP26, COP26 President-Designate Alok Sharma asked Jonathan Wilkinson, Canada’s Minister of Environment and Climate Change, and Jochen Flasbarth, Germany´s State Secretary at the Ministry for Environment, Nature Conservation and Nuclear Safety, to work together to produce a Delivery Plan on the $100 billion commitment, to demonstrate how and when developed countries will deliver on their promise. This was published on October 25, alongside a technical report from the OECD.

What will happen at COP26 today and tomorrow?

As COP26 is underway, today and tomorrow will be for world leaders to make national statements on their plans for COP26.

World leaders will be discussing mitigation, adaptation and finance – which are at the heart of COP26 – and what else must be done to deliver on the Paris Agreement.

What should the world do to ensure success at COP26?

According to analysts, four things must happen for us to call COP26 a success as it should not be another talk show but a gathering backed with intentional action to:

Ensure concrete delivery plan to back emission reduction commitments. It is already bad that the world’s greatest polluters like China are not seeing the urgency in the plan to reduce their emission as their recently published national plan on greenhouse gas emissions shows unimpressive progress on the previously announced ambitions of the world’s biggest carbon emitter. The plan had a lot of observers disappointed. In its plan, China said its emissions would peak by 2030 and be reduced to net zero three decades later.

Ed Conway, economics and data editor at Sky News, said If Russia and China are not actually there in the room, then that is a pretty big signal that they are not necessarily committed as wholeheartedly as everyone hoped they would be.

“If these big multilateral plans to sort out climate change are going to work, they have to be exactly what that says – multilateral – and if every country is not involved, especially the big polluters, then you’ve got a bit of a problem.”

He added that clarity on a global carbon price would be another way to deem COP26 a success.

The Tony Blair institute noted that COP26 should chart a clear path for low- and middle-income countries (LMICs) to enable decarbonisation, resilience, energy access, and economic growth. The Paris Agreement committed high-income countries to provide $100 billion of support per year to help fund climate resilience and adaptation in lower-income countries – an important start, but not a true reflection of the level of assistance that will be needed. Even that original commitment has not been met. At COP26, the wealthiest countries need not only meet that target; they must set a more stretching goal to support their lower-income counterparts in establishing pathways to decarbonisation that cut emissions, enable universal energy access and strengthen economic growth.

According to Reuters, a major priority for COP26 is for negotiators from the nearly 200 countries that signed the 2015 Paris Agreement to finish the rules to implement the accord. That includes thorny discussions on carbon markets, how countries will set climate targets in the future, and finance.

As we enter the second day of COP26, the world is watching to see how the event will shape the future of developing countries and as the president of South Africa said, for talks on energy transition to be acknowledged, developed economies must be sincere in talk and action.

“We want your more developed economies that have been responsible for the greatest emissions in the world, to be the ones who will live up to the offers they have made in the past, once they do that, we will then be able to navigate our own transition.”

This story was originally published on Premium Times.

Akintunde Babatunde
View More Posts
Akintunde Babatunde is the Head of Natural Resource Governance and Climate Change for the Premium Times Centre for Investigative Journalism. He is a graduate of Educational Management (Mathematics), from the University of Ibadan. He has an MA (with Distinction) in Media Practice for Development and Social Change from the University of Sussex, United Kingdom. Akintunde won the prestigious UK and Commonwealth Office Chevening scholarship for Future Leaders in 2020 and was nominated as a finalist for the Africa Check Award in 2018. He is an Ambassador on UNESCO supported media and information literacy alliance, a member of the United Nations Framework Convention on Climate Change Youth Constituency (YOUNGO), a 2021 climate reality leader of the climate reality project, and a climate activist with One Campaign where he is also engaged with the Africa-Europe task force. Twitter: @olorunwababs 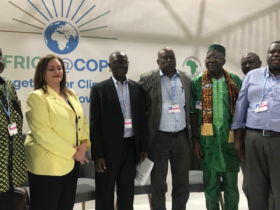 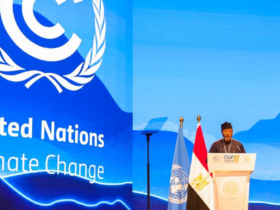