Every few days, Dr. Mahmoud Abbas crosses the road from Qena Governorate, where he lives, to the city of Safaga, to supervise the honey apiary located among the mangroves in the Red Sea. Dr. Abbas works as a professor in the Department of Plant Protection at South Valley University in Egypt.

In the first quarter of 2020, the national Egyptian government began a project to plant mangroves and rehabilitate six areas on the Egyptian coast of the Red Sea. The initiative intends to cover 210 hectares by planting 50,000 small plant seedlings every year.

In addition, a honey apiary was established in Safaga for the production of mangrove honey.

Restoring the presence of mangroves has become a necessity all over the world. From 1980 to 2005, between 20% to 35% of the world’s mangrove forests were lost, according to the U.N. Food and Agriculture Organization.

The mangrove plantation project is part of a trend towards practices aimed at mitigating the effects of climate change and increasing communities’ ability to adapt to it. Mangroves are considered a guard of nature: they grow in salt water and act as a natural barrier if the sea level rises, protecting the beaches from erosion.

Solutions from this project could add to some of the ideas being discussed at the UN’s Climate Change Conference COP26. Not only are leaders pledging to stop deforestation, but they’re also discussing market mechanisms to suck carbon out of the air.

This is where mangroves come in, as they’re capable of absorbing enormous amounts of carbon. Even though they cover only 3% of Earth’s forest cover, if they were all cut down they would contribute to 10% of emissions, according to a NASA study.

Dr. Mahmoud Abbas supervises the 20 beehives in Safaga’s apiary. Moreover, the honey apiary has created job opportunities for some of the residents in the area.

The bees feed on the nectar of two types of mangrove trees scattered on the coast of the city to produce a rare type of honey. According to Dr. Mahmoud, honey comes out with a distinct flavour because the mangroves that bees feed on grow in saltwater. Also because of this, they do not need fresh water irrigation, fertilizers or agricultural pesticides.

According to Dr Mahmoud, the mangrove flowers bloom in the early winter months. Since this is usually a difficult period for bees due to the lack of blossoms, this is an additional advantage of the mangrove plantation.

The experience of honey production is not without challenges, first being the seasonality of production. As plants do not bloom all year round, a ‘mobile honey apiary’ has allowed the easy transfer of bees to other areas to feed on plants that bloom at different times, such as mountain plants.

This solution allows bees to produce a greater amount of honey, with the hope that production will develop in the cultivated area.

The other challenge is the bees’ need for freshwater. The project organizers resolved this issue by placing large containers filled with fresh water and materials such as sponges. This allows the bees to drink from the containers.

Dr Mahmoud enjoys seeing the biodiversity of living creatures around the mangroves. On his work visits, he spots various types of bees, butterflies and insects, as well as multiple fish species. In addition, one can see the Warwar bird feeding on insects on his migratory route.

According to a report by FAO forests contain most of the planet’s biological diversity. The report stated that forests host 60,000 different species of trees, 80% of the world’s amphibian species, 75% of bird species, and 68% of mammal species.

In Egypt, the area of ​​mangrove forests is about 1,500 acres, according to Dr Sayed Khalifa, the head of the Egyptian Agricultural Syndicate. Dr Khalifa is also the director of the mangrove project, in which several Egyptian government agencies participate.

He described the mangrove trees as “natural barriers” protecting the shores of the Red Sea. As this shield is not available on the Mediterranean shores, the government is forced to make cement blocks to counter the sea level rise and protect cities.

Until 2005, some of the Egyptian population living around the mangrove forests brought their camels to feed on the trees, which led to their deterioration.

According to Khalifa, the increase of awareness campaigns and the introduction of economic activities on the margins of the forests such as the honey apiaries have put an end to these practices.

The benefits of mangroves are not limited to protecting the environment and nurturing living creatures, but they also hold important economic potential as a source of tourism and ecosystem services, Khalifa said.

In another context, the mangrove planting project in Egypt could become an important part of the “Green Middle East” initiative launched by the Kingdom of Saudi Arabia to plant 50 billion trees, says Dr. Mohamed Fahim, head of the Egyptian Agricultural Climate Change Center.

Planting this huge number of other trees during the initiative will necessarily represent a great pressure on the required water resources, so mangroves represent a strong contribution because they do not need irrigation with fresh water and will reduce this pressure in addition to its environmental benefits, according to Fahim, since the beginning of their cultivation, trees contribute to the absorption of carbon dioxide, and the greater its volume, the greater its capacity.

This article was edited on November 15th to add additional information about Saudi Arabia’s 50 billion trees initiative and mangrove’s benefits for freashwater. 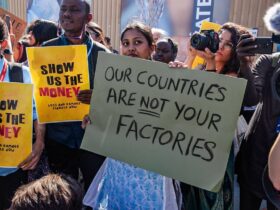